It’s the new golden age of cycling! (yet again) 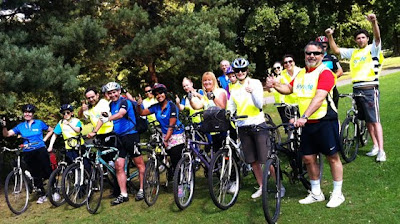 As it’s far too dangerous to cycle on the roads we thought we’d have a smiley-smiley group photo in a park.


Yes, thrilling news of a campaign to get a million more people riding their bikes by 2013. Absolutely no infrastructure required. With just a simple press release from British Cycling, all that is required is words and joyous optimism.

Don’t say: Not yet more tired old crap from the collaborationist wing of the failed UK cycling promotion industry which is bloated with vested interests and is a major impediment to the creation of a mass cycling culture in Britain.


Tunbridge Wells is part of a massive boom in regular cycling

Says the headline on a recycled press release which, er, says nothing at all about cycling in Tunbridge Wells.

Or to elaborate: it’s unbelievably car-sick and as crap for cycling as anywhere else in Britain.

Also some bits are seriously hilly.
Posted by Freewheeler at 10:12