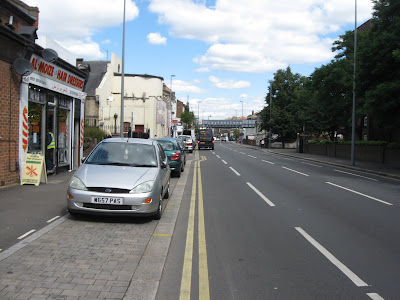 David Hembrow has reproduced a photograph used in a recent post of mine with a scene from a Dutch street, commenting: In the Netherlands, this is a technique used to civilize residential streets which are not busy through roads, which do not have a high number of motor vehicles passing through and which have a 30 km/h speed limit. In the UK the same thing is being done on busy through roads with higher speed limits and lots of traffic.

He shows lots of other Dutch examples here.

I do not see what is wrong with the UK example you give in this post. Dare I say that the smooth tarmac of the UK cycle lane looks more appealing to me than the Dutch cobblestones... In addition, that is not a "parking lane" to the left of the picture, as the double yellow lines are also applicable within that section of road. This must therefore be just a loading bay. P.S. May I just clarify that I cycle a lot in both the UK and mainland Europe and generally feel that UK cycling infrastructure is very poor, often lethal. I just think that this particular photo, showing a well-maintained road and relatively wide cycle lane, doesn't really illustrate your point very well.

This is a good example of the confusion which can arise from a simple comparison of two apparently similar scenes. However before commenting on that, let me quickly say that the commenter is quite mistaken in asserting that the High Road Leytonstone photograph shows a loading bay. It doesn’t. Anyone can park in these bays and similar bays can be found all along this road, most of them filled with cars (as shown in the photo above). The reason why the bays shown in the photograph used by David Hembrow are empty is probably precisely because they aren’t outside shops.

Mixing with motor traffic on a Dutch street is quite different than it is on a London street. I realise in retrospect that my photo is unintentionally misleading because it makes it appear that High Road Leytonstone is a quiet street with little parking. In fact my photo just happened to be taken when there was a gap in the traffic. Luckily it was one of a sequence which I took while cycling up this street on a weekday and I reproduce the other ones below to put this isolated photo into context.

High Road Leytonstone is a road which links up with major London through routes and it carries huge volumes of motor traffic. One relatively small section is one-way with a contraflow lane for cyclists. This last feature is of course welcome but isolated infrastructure for cyclists is no use at all unless it forms part of a coherent and connected network. This remains the British disease: cycling infrastructure of any sort is always built on car-centric terms: as soon as it conflicts with the greater priority of ‘smooth traffic flow’ it notoriously comes to a sudden end. And, depressingly, Britain continues to go ever-backward. Over in South Gloucestershire they are seizing space from cyclists and pedestrians to benefit drivers.

In the London Borough of Waltham Forest things are no different, with the model used on Wood Street E17 (below) being rolled out across the borough. It is madness to build out the footway forcing cyclists closer to overtaking motor vehicles, especially buses and lorries, while at the same time creating new dangers from ‘dooring’. To do this is to make the conditions of vehicular cycling even worse and more off-putting than they were before. Here on Wood Street cyclists are pushed even closer to overtaking motor vehicles on a dangerous bend. 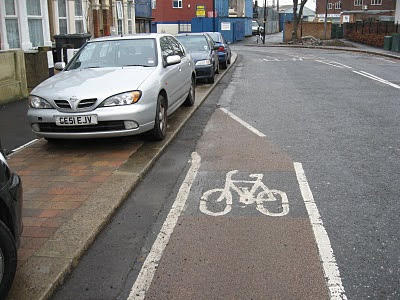 The recent ‘improvements’ on High Road Leystonstone are designed to encourage car use for short journeys, and they have been introduced with the enthusiastic collaboration of Transport for London. In some sections, including the one shown in the photograph used by David Hembrow, speeding is a problem. The speed limit is nominally 30 mph – far too high for a shopping street with residential housing mixed in – but some drivers are plainly exceeding this to a significant degree when the opportunity arises (such as early in the morning, or in the evening, or when traffic levels are low).

High Road Leytonstone is a major route which runs north-south from the Green Man Interchange (where the A114 and the A11/A1199 and the A113 connect with the A12, which connects the M11 motorway and North Circular Road (A406) with the Blackwall Tunnel) down to Stratford. Its ‘A’ road status was revoked when the A12 was reconfigured and pushed through Wanstead, Leytonstone and Leyton. Just looking at a map can give completely the false impression, since this section of the A12 is basically a motorway (albeit with a 50 mph limit) and cyclists are banned, while High Road Leytonstone, which lacks even the status of a ‘B’ road, carries massive volumes of motor traffic, far in excess of other local roads of equal status.

High Road Leytonstone is precisely the kind of direct, major route with high volume traffic which requires Dutch-style segregated cycle paths and where the space is available. It is a road which was once earmarked for total pedestrianisation – a project which was relentlessly subverted to result in the motor vehicle choked mess of today. Bear in mind that it is in a London borough where cycling’s modal share is, according to the most recent TfL figures, under one per cent. High Road Leytonstone has standard vehicular cycling infrastructure, including the classic template of the cycle lane leading into an Advanced Stop Line cycling reservoir. This cycling infrastructure notoriously lures the unwary cyclist into danger, especially when it concerns a lorry driver’s ‘blind spot’. Here is a recent instance which occurred on High Road Leytonstone, not far from where the photograph used by David Hembrow was taken.

The photographs below show conditions for cycling northward on High Road Leytonstone after the junction with Southwell Grove Road, a distance of less than half a mile. They were taken in a single continuous journey over a period of about three-four minutes. The first one was taken just before the scene shown in the photo used by David Hembrow, and the others show conditions beyond that location.

The reality is that the double yellow line ‘No Waiting At Any Time’ restrictions, designed to deter drivers from parking in the cycle lane, are regularly ignored, and that apart from the danger of ‘dooring’, drivers leaving their parking space rarely bother to consider if a cyclist is coming along, and block the cycle lane as they manoeuvre to slip into the line of traffic backed-up from the signalled junction at Church Lane. The final blurry photograph records what happens when a bus driver moves into the cycle lane in order to deposit passengers before reaching the bus stop.

In short, cycling up High Road Leytonstone is not a relaxing experience, and is fraught with danger and obstruction. The notion that conditions for cycling on this street are superior to those found on Dutch streets is not persuasive. 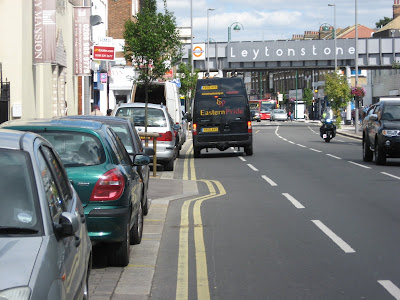 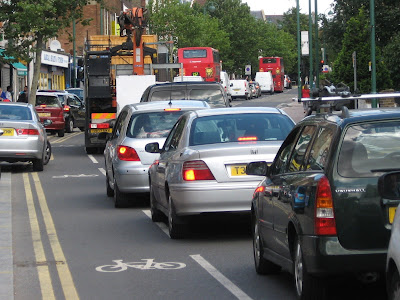 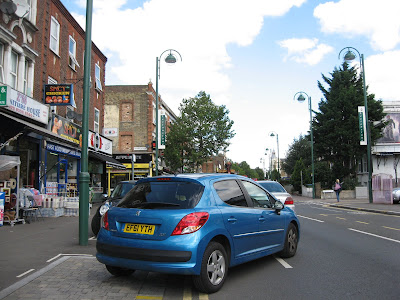 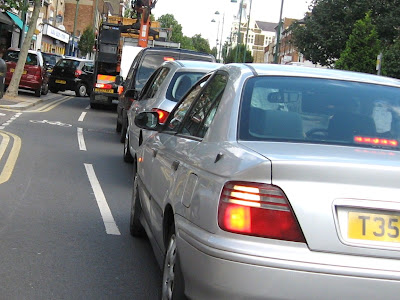 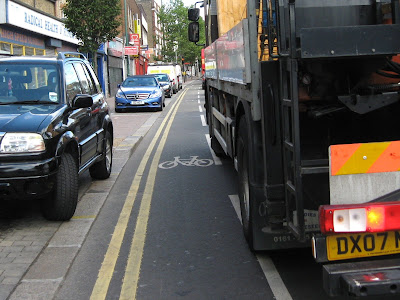 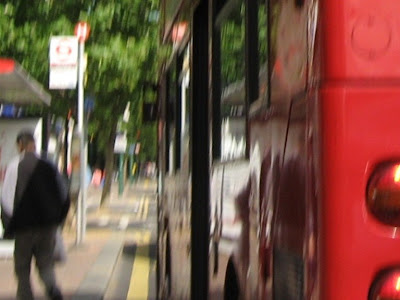 Posted by Freewheeler at 12:55