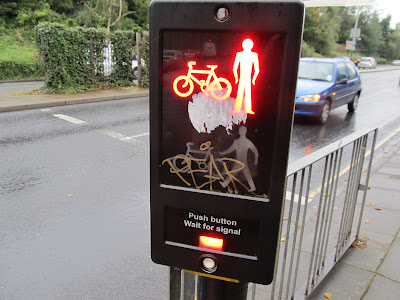 Let me offer up a category: cycling noise.

Cycling noise is an initiative or campaign which purports to ‘encourage cycling’ or make it safer but which doesn’t reduce the presence of motor vehicles on the street, in terms of volume. The existing volume of motor traffic may be restrained or modified in superficial ways – by traffic calming, say, or a lower speed limit – but the volume and presence of the existing motor vehicles are not reduced, either in terms of traffic flow or parking. In other words, cycling noise initiatives are inherently rooted in vehicular cycling and as such ignore the core issue of subjective safety (on which topic there are interesting insights here). Or to put it another way, cycling noise campaigns never challenge the car-centric status quo.

This week Shadow transport minister Maria Eagle made a speech to the Labour party conference:

I congratulate The Times on their Cities Fit for Cyclists campaign. The Government should implement the campaign’s manifesto for change. In full.

Whoever wrote Ms. Eagle’s speech for her plainly hasn’t read The Times Manifesto very carefully, since it nowhere mentions “separated cycle-ways”. If the Labour Party plans to make a manifesto commitment to the reallocation of road space on main roads through urban centres from drivers to cyclists through the medium of physically segregated cycle tracks, then that is very good news indeed. However, uplifting speeches made to enthusiastic party loyalists need to be treated with caution, or better still, extreme scepticism. I suspect it is nothing more than rhetoric.

If you have the stomach to read the complete speech you’ll see that Ms. Eagle also positions herself as the friend of the hard-pressed driver and wants cheaper motoring. Leaving aside the deficiencies of the Times Manifesto – you can find point-by-point critical analysis here, I felt that The Cycling Lawyer hit the nail on the head when he remarked a few months ago:

The trouble is that 'The Times' is not calling for infrastructure changes that may adversely impact motorists.

In other words, the Times Manifesto is itself nothing more than cycling noise because it doesn’t engage with the basic reason why most people won’t cycle and it doesn’t campaign for the kind of cycling infrastructure that would. Instead it merely ameliorates some aspects of vehicular cycling.

And that brings us back to the core wisdom of Dave Horton:

We’ve got a cycling promotion industry in the UK which refuses to contemplate the act of deterring driving. It’s always promoting cycling around the edges, not seeking to dismantle the central system of mobility in the UK, which is the car.

It’s also worth remembering the very long history of politicians pledging their support for cycling and promising to encourage it:

since Lynda Chalker’s encouragement of cycling in 1985 until 2010, [there has been] an increase in car, van and taxi vehicle passenger distance travelled of some 48%. All motor vehicle mileage (e.g. including lorries) has gone up by 57%. Cycling distance travelled nationally decreased by about 17%.

Not very effective on the encouragement front.

Among those overjoyed by Ms. Eagle’s slithery speech was this person:

Sustrans' policy adviser Joe Williams welcomed the commitment: "Slower speeds on our streets will make the biggest difference to getting more of us out walking and cycling.

As far as cycling is concerned the biggest difference can be made only through the principle of separation of cyclists from motor vehicles, particularly by creating bike grids in urban centres. That’s how the Dutch cycling revolution began. It did not begin with sticking up speed limit signs.

Everybody from car-centric politicians to the vehicular cycling campaign establishment loves ‘Twenty's Plenty’ because 20 mph zones in no way threaten to curb the presence or volume of motor vehicles on British streets. Obviously 20 mph zones are a Good Thing in so far as they reduce the seriousness of the consequences of collisions but they do not in themselves civilise streets. If you want to get more people walking and cycling you achieve it by creating a safe, pleasant walking and cycling environment. That’s what will make the biggest difference, not sticking up 20 mph signs in car-sodden streets. For both travel modes that means separation from motor vehicles, whether through pedestrianisation or segregated cycle paths. It requires a reduction in the presence of vehicles on our car-sick streets and pavements.

SUSTRANS more and more resembles an organisation which has completely lost the plot and exists only to perpetuate its own existence. It is quite literally a collaborationist organisation, which is happy to ally itself with a borough which is absolutely NOT a friend of either the cyclist or the pedestrian. Listen to this other fresh example of Sustrans cycling noise:

CYCLING shoppers who use their local high street will be rewarded in a new loyalty card scheme. Sustainble transport charity Sustrans has launched the scheme with Redbridge Council as part of the council's pledge to become a biking borough.

More than a dozen shops in High Street, Wanstead have signed up to the scheme which rewards cyclists for shopping locally.

Cycling promotion officer for Sustrans, Emilie Charlesworth, said: "Wanstead has got this local high street feel to it. Residents and shopkeepers want to preserve that feel.

Redbridge Council is a viciously pro-car Conservative administration with an extreme reluctance to curb the use or parking of cars in the borough. It’s cycling modal share is risible. As for High Street, Wanstead. It’s about thirty feet wide and dotted with NO CYCLING signs. Redbridge Council could very easily create segregated cycle paths on the High Street, but as the council understands nothing whatever about cycling there’s little chance of this ever happening. This cosmetic scheme won’t get a single extra person cycling on the hellish roads which lead to Wanstead High Street, and for Sustrans to involve itself with this kind of fatuous and inane scheme shows that the organisation is not fit for purpose.

In 2011, there was an eight per cent increase in cyclists as road casualties across Hampshire and the Isle of Wight, with 190 seriously injured and one cyclist killed.

In 2012, there has been another death, and the levels of cyclists being injured or killed on the roads of the UK nationally are increasing.

Since in the majority of collisions the motorist not the cyclist is at fault, will there be a crackdown on reckless driving? Er, no.

Officers from Hampshire Constabulary's Roads Policing Unit have created the Steer Clear campaign, which is being launched across the county on October 1.

New signs will be appearing on the roads of Hampshire today (October 1) to raise public awareness of the dangers posed to cyclists.

Throughout October, officers will be carrying out initiatives to raise cyclists awareness of safety on the roads including knowledge of the Highway Code, basic road safety, and traffic awareness.

Our message to cyclists is very simple; be safe and be seen. Our leaflet highlights key safety tips, and gives you some discount vouchers to help get yourself kitted out properly; think high visibility, check your lights, and remember the Highway Code, it is really important. Things like cycling recklessly on the pavement, having no lights on your bike, cycling and driving under the influence of drugs and drink, or more than one person riding on a solo bike. We will be focusing on encouraging all road users to grasp the concept of mutual respect. We want to foster a culture of mutual respect between all road users to create a safer environment on the roads.

Apart from the conspicuity crap (all about cyclists doing their best to shine a bright yellow in the hope of being noticed by the texting driver), and apart from the reality that the thrust of this campaign is focused on cyclists not drivers, there is not a scrap of evidence that ‘ mutual respect’ campaigns or education have the slightest beneficial result. This is not evidence-based 'road safety'. Crap campaigns like this are a substitute for road traffic law enforcement in a vehicular cycling environment. If the police were at all interested in making the roads safer they could start taking driver crime seriously, since the latest figures show that:

47% of cars exceeded a 30mph speed limit in 2011, while 49% went faster than 70mph on a motorway. The proportions of motorcyclists breaking the same speed limits were similar, at 50% and 49% respectively.

The figures for articulated heavy goods vehicles (HGVs) were considerable higher, with 71% exceeding the single carriageway 40mph limit and more than four in five breaking the 50mph limit on dual carriageways.

The road haulage industry is out of control, yet there is no shortage of cycle campaigning which hopes to make lorry drivers nice people who remember to watch out for cyclists at junctions.

It is reported that

Annual road casualty statistics showed that overall cyclist casualties reported to the police rose by 12 per cent between 2010 and 2011. While the number of fatalities fell by 4 per cent to 104, the number of cyclists who were seriously injured rose by 16 per cent to 3,085 last year.

The number of serious injuries has increased every year since 2004.

Commenting on this Times story

Robert Gifford, Executive Director of the Parliamentary Advisory Council for Transport Safety, said: “Both central and local government need to do far more to make our infrastructure more suited to cycling with dedicated cycle lanes where appropriate, better signed advance stop lines and campaigns aimed at getting car drivers to look out for cyclists.”

Nothing but the same old crap. Leaving aside the fact that cycle lanes alongside or amidst motor vehicles have demonstrably failed to bring about mass cycling in Britain, that weasel phrase ‘where appropriate’ is a giveaway. Cycle lanes very often fizzle out just before road junctions, so they won’t get in the way of ‘stacking’ motor vehicles in two or three lanes (in central London sometimes even more) to ‘smooth traffic flow’. To allow a British transport planner to determine what is ‘appropriate’ for cycling is to surrender before the battle has even begun.

As for ‘better signed advance [sic] stop lines’. Yes, perhaps we could make them even more conspicuous.

Here is a helpful design showing a traditional cycle lane leading to an ASL. It also happens to exactly match this lorry driver’s rather substantial ‘blind spot’. 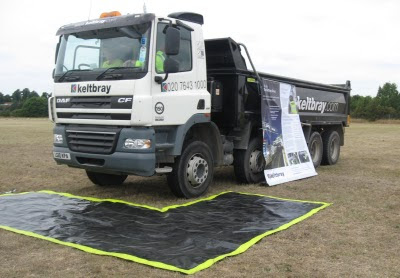 Posted by Freewheeler at 14:54