If you happen to take a train to York and then walk into the city centre, which is very close, you will soon come to this junction (below), where Station Road meets the junction with Rougier Street.

Here, York Council’s priorities are very clearly the convenience of drivers over the convenience of pedestrians. Pedestrians are expected to cross a standard two lane carriageway in two separate light phases. Once you have crossed a single lane at the green phase you are then confronted by a red phase and expected to wait on a small traffic island with zig-zag fencing designed to deter pedestrians from attempting anything so anarchic as crossing the road in one go.

Apart from all the other objections to this way of treating pedestrians, the island is far too small to accommodate the sheer volume of pedestrians during busy periods.

The phasing, needless to say, is weighted in favour of the driver, not the pedestrian.

This photograph shows a typical situation at this junction, with nine pedestrians strung out across the entrance to Rougier Street, three of them marooned on the traffic island. A man with a case, who is almost certainly heading towards the station, has stepped out into the carriageway and is standing in the path of any left-turning vehicles approaching him from behind from the Lendal Bridge direction. He has probably walked out beyond the footway out of sheer frustration at the length of the red signal, only to be stopped in his tracks by oncoming vehicles approaching from the third arm of this junction, Leeman Road 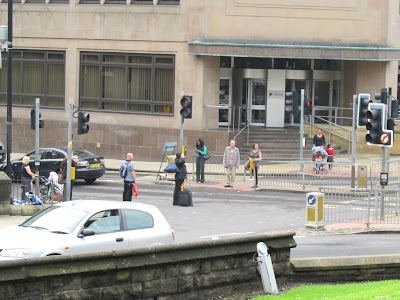 This junction forms part of a one-way gyratory which funnels motor vehicles and cyclists along the arms of a triangle which connects Station Road with Leeman Road. This next photograph (below) shows the point at which Leeman Road meets Station Road opposite the junction with Rougier Street. You will see a cyclist pushing her bike. My reasonably informed guess is that she plans to cycle along Leeman Road (which provides access to a broad swathe of suburban west York) and preferred not to go round the gyratory. Instead of cycling she prefers to get off and walk across the pedestrian crossings. If my guess is correct, she is negotiating her safe passage in a lawful way but at some inconvenience to herself in terms of the time taken to travel a short distance. 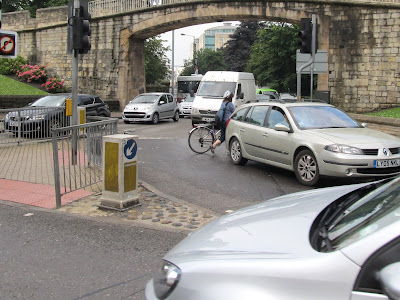 I can be altogether more certain of the destination of this second cyclist, because I caught it on camera. This photograph shows Rougier Street. Now there are seven pedestrians marooned on the traffic island and six more waiting to cross from the Lendal Bridge side. But look carefully (below) and you will see that a cyclist has arrived on the scene. Instead of turning left into Station Road, as required by the one-way system, he has chosen to wait on some dashed white lines in the centre of the carriageway, just before the traffic island. He can be seen wedged between the double decker bus heading into Rougier Street and the oncoming single decker bus which is about to turn left into the gyratory. The single decker bus is forced to pass the cyclist quite closely, thanks to an illegally parked DHL delivery van, which is partly parked on the footway, on a double yellow line, while obstructing the cycle lane. 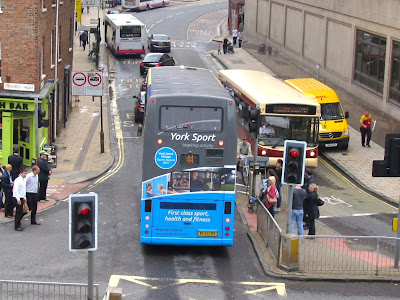 The behaviour of the pedestrians in the next photograph (below) is interesting. The light phase is at red but while three pedestrians hang back, five other pedestrians decide to make a run for it. In the foreground an officer worker in a white short ignores the traffic island altogether and sprints along Station Road. The cyclist remains exactly where he was. 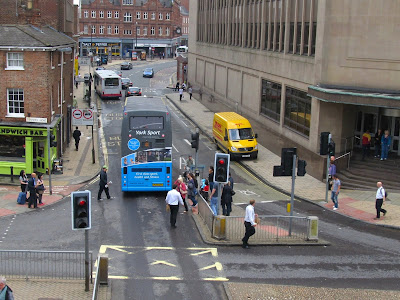 (Below) Three more pedestrians make a run for it, while the cautious ones continue to wait. The cyclist also waits. (Below) Oncoming vehicles from Leeman Road are held at a red light and the cyclist sees his chance. He weaves between the crossing pedestrians and cycles against the traffic flow on Station Road. This is plainly a local cyclist who knows the phasing at this junction and prefers to turn right by exploiting its opportunities rather than behave as a vehicular cyclist is supposed to, by obeying the rules and cycling round the gyratory. 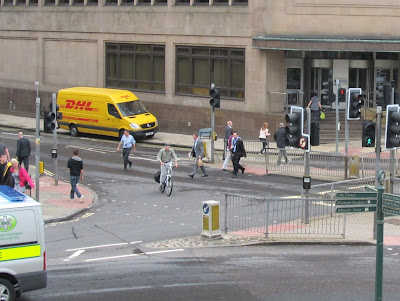 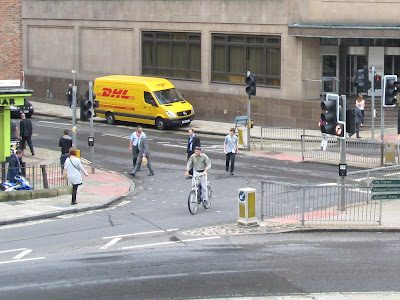 (Below) Our cyclist has made it across to the ‘right’ side of the road, where he catches up with a long line of vehicles backed up across Lendal Bridge all the way from the junction of Museum Street and St Leonard’s Place. Our cyclist plainly possesses self-confidence, as he overtakes a stationary ambulance using the oncoming lane. In the foreground a pedestrian avoids the time-wasting exercise of using the signalled crossings by instead walking across in front of a slow-moving van. 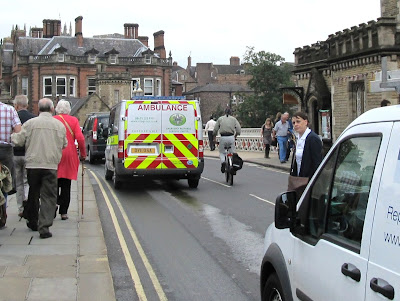 My impression is that some York cyclists prefer not to cycle round this particular gyratory and will adapt their behaviour to avoid doing so. The two cyclists I observed were negotiating their own safe passage in their own chosen ways. One obeyed the rules, one did not. But neither wanted to conform to the expectations placed upon vehicular cyclists by infrastructure which is comprehensively car-centric and neglectful of the interests of both pedestrians and cyclists.

Of course if York Council really put pedestrians and cyclists first it would block off all access to Rougier Street to motor vehicles at this junction, and completely re-design this junction. But as we know, in York the car is king and the Council shows no inclination to change its priority of smooth traffic flow and of encouraging drivers to access all areas. Cycling, needless to say, can never thrive in an environment like this.
Posted by Freewheeler at 11:00