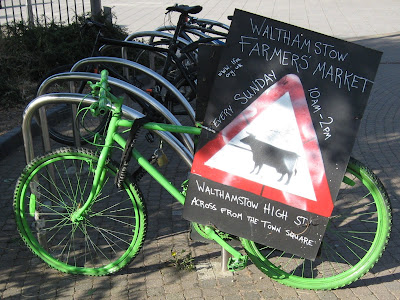 This green bike with a board advertising the Sunday farmers’ market in the Town Square has been parked here for about six months now. I wouldn’t care if it was locked to the nearby railings but I do object to it obstructing a bike stand on a permanent basis. This obstruction is occurring at one of the most prominent locations in the borough and it demonstrates how even at the most parochial level, Waltham Forest Council doesn’t give a toss about cycling. 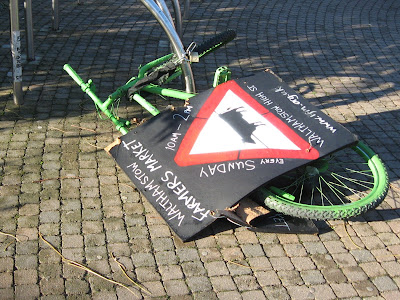 The farmers’ market also puts up notices on street furniture all over central Walthamstow, which is flyposting. The Council is very tough on enforcing by-laws when it comes to people putting up a stall in the Town Square inviting residents to sign a petition against the infamous Chris Robbins regime (QV. ‘Rotten Boroughs’ in Private Eye), and it has in the past threatened a resident with legal action for sticking up a ‘have you seen my missing cat?’ notice on a lamp post. But others, it seems, can plaster the neighbourhood with their signs and no action will be taken. 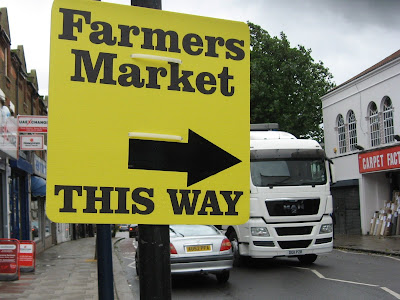 (Above) Hoe Street. The sign is attached to a zebra crossing pole. Note the cycling-friendly conditions in the background, on this major north-south route across the borough. 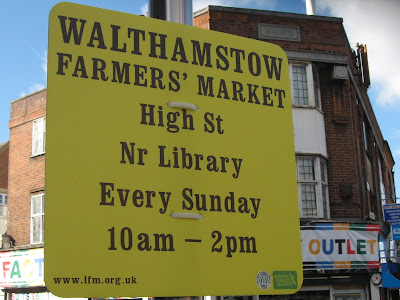 Posted by Freewheeler at 10:06