Cycle parking: there is always room for improvement 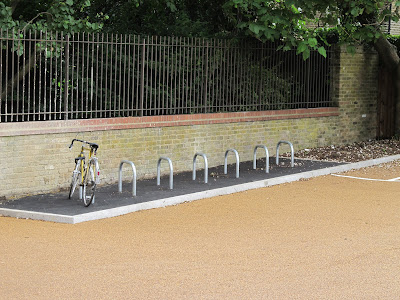 When the William Morris Gallery re-opened in the first week of August, after an expensive refurbishment, it was a delight to discover that the Gallery now has new cycle stands. They are close to the entrance to the Gallery and are in a very visible position, helping to deter bike thieves.

However, there is no room for complacency. In the Netherlands, in their perpetual quest to make cycling even more attractive than it already is, they think nothing of moving a canal sideways for the benefit of cyclists.

Here, too, in the London Borough of Waltham Forest, the improvements for cyclists never end. When I took the above photograph on 4 August it never occurred to me that these bike stands could possibly be enhanced, let alone in just a couple of months. How wrong I was!

What I had overlooked was that the entrance to the Gallery is on Forest Road, also known as the A 503, a major east-west route through the borough. Anyone who cycles to the Gallery will therefore have to endure cycling among heavy goods vehicles, white vans, minicabs, buses etc., which means there is always the possibility of experiencing moments of extreme terror and stress. This may result in an involuntary loosening of the bowels.

Also it is now autumn and the days are turning chillier. By the time a cyclist has arrived at the William Morris Gallery it is possible that some pressure on the bladder may be felt.

In short, how best should a responsible local authority meet the challenge of an incontinent cyclist in urgent need of relief?

Here in Waltham Forest a progressive Council has signed up to a Toilet Facility Hierarchy of Provision, which puts the cyclist in first place. The convenience of the cyclist who, having parked her or his bicycle, requires urgent relief, simply cannot be bettered than here at the Gallery, where a first class bike parking facility has now been imaginatively enhanced in a way that surely sets the gold standard for all other local authorities to follow. 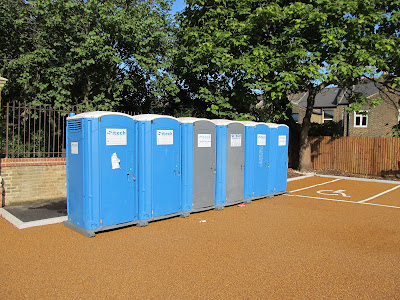 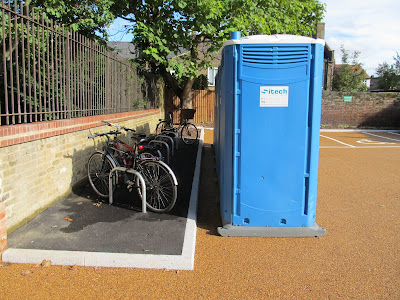 Posted by Freewheeler at 13:04