London cyclist killed by lorry this afternoon in High Barnet

A cyclist was killed when she was hit by a lorry in High Barnet this afternoon.

Police have sealed off High Street (A1000) at the junction with Wood Street after the collision at 3pm.

Witnesses said a red blanket was placed over the woman, who was pronounced dead at the scene.


The lorry that hit the cyclist is owned by building contractors Fitzgerald and Burke, based in Oakleigh Road South, New Southgate. No-one at the business was available for comment this evening.

Maya Patel, co-owner of The Barnet Store newsagent near to the scene of the accident said: “It is a narrow stretch of road and if a lorry and a cyclist were coming through together it would be tight

It would indeed. From early press reports it would appear that the fatal collision took place on this bend, with the lorry and presumably also the cyclist in the left lane, heading towards the church.

The driver stopped at the scene and was arrested on suspicion of causing death by careless driving.” 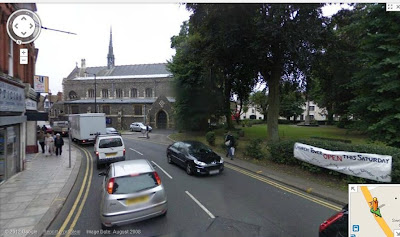 Meanwhile in Bromley a cyclist run down yesterday by a hit and run driver is currently in a critical condition.
Posted by Freewheeler at 18:05