Permeability in the Netherlands, Hackney and Waltham Forest

With the issue of access for cyclists through road closures in the news it’s a good moment to scrutinise the issue of permeability.

Permeability (i.e. giving cyclists direct access through urban areas) is definitely part of creating a mass cycling culture, and it can be achieved in a variety of ways from segregated cycle tracks on main roads and dedicated traffic-free cycling infrastructure such as cyclists-only bridges to street networks that reduce the volume of motor vehicle flow by making them impermeable to rat running and inconvenient for drivers by forcing them on to circuitous routes. This can be achieved by road closures with access only for cyclists and pedestrians or by one-way networks which prioritise cycle flow using contraflow lanes and which are sealed off to through traffic. There are many examples of the Dutch model.

In the UK permeability is usually understood to mean road closures with cycling access or contraflow lanes. The LCC’s Hackney branch has long campaigned for this type of permeability (although obviously there’s always a sulky cycling blogger who’ll whinge about the execution - see this and this).

But credit where credit is due. I think we can reasonably attribute cycle campaigning to the second statistic here:

i) how many streets are there in the London Borough of Hackney?

There are 876 streets within the London Borough of Hackney.

ii) how many of these streets are closed to through motor traffic but have gaps designed for free passage by cyclists?

The Council's latest records show there are 59 roads that are closed to motor traffic but have access for cyclists.

I thought it would be interesting to compare Hackney with Waltham Forest, so I asked the same questions. Alas, so dysfunctional is transport planning in the London Borough of Waltham Forest that the planners don’t even know exactly how many streets there are.

i) how many streets are there in the London Borough of Waltham Forest?

The London Borough of Waltham Forest has approximately 1700 streets within the borough.

ii) how many of these streets are closed to through motor traffic but have gaps designed for free passage by cyclists?

The London Borough of Waltham Forest does not hold any records specific to these requests and no data is available.

Marvellous. And this crap borough is supposed to be delivering a new Amsterdam.

There are road closures in Waltham Forest, but the planners have never quite got round to embracing the concept of permeability. Like here, for example, next to the Lord Brooke on Shernhall Street. A quick, quiet almost entirely traffic free route to Wood Street is cleverly made unattractive for cycling. 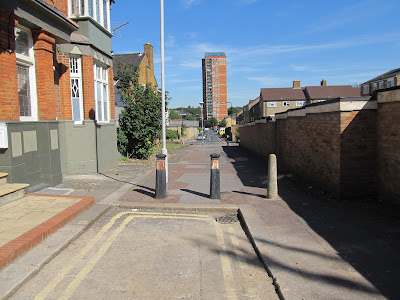 Even more impressive is the very latest road closure in the borough. On Palmerston Road a weak bridge required restricting the passage of large heavy vehicles such as lorries and buses. In order to deter sneaky rat running by lorry drivers, Somers Road was closed off to all motor vehicles at the junction with Palmerston Road. But, revealingly, no thought at all was given to cyclists, even though this is a popular route. Note that this road closure was put in SINCE the council claimed to have embraced the LCC’s ‘Go Dutch’ policy. 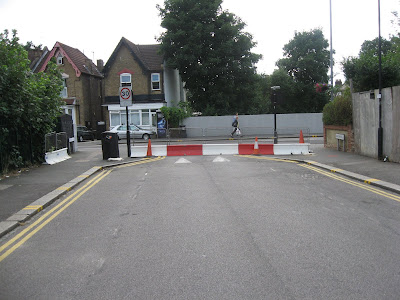 Road closures with cycling access can form an important component of creating a permeable cycling network but are unlikely in themselves to generate a mass cycling culture. Hackney evidently has more permeability than Waltham Forest but this in itself doesn’t explain the disparity in modal share between the two boroughs, with at least six times as many people cycling in Hackney as in Waltham Forest.

But, arguably, while Waltham Forest is plainly a massively failed borough, with a modal share of under one per cent, things may not be quite so rosy in Hackney. What Hackney lacks is segregated cycle tracks and in my view cycling is always going to be restrained there until the borough truly embraces the Dutch template. However, Hackney’s cycling activists remain committed to vehicular cycling and sharing the road:

Conduct a survey on what most non-cycling people want before they will consider riding a bike and this list is likely to include cycle lanes, painted surfaces and segregated cycle tracks. But ask Mr Parsons and other members of his group in Hackney and the list will be quite different. It will involve offering a comprehensive cycle training programme, lower motor traffic speeds, easy direct travel from A to B by bike and generally accepting that we can share highway space.
Posted by Freewheeler at 13:00