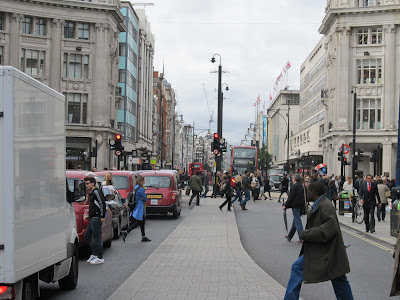 Oxford Street, choked with buses and taxis, and open to any motorist.

London’s top public transport chief has dismissed calls to rid Oxford Street of its “wall of red double deckers” saying it would require two vast “unacceptable and desecrating” bus stations to be built in the heart of the West End. The Mayor’s Transport Commissioner Peter Hendy was responding for the first time to growing demands from West End business that the volume of buses on London’s premier shopping street should be dramatically scaled back.

One proposal put forward is for east-west bus routes to stop at either end of Oxford Street with a shuttle service or tram running its one and a half mile length. But Mr Hendy said while the option had been looked at it had been decided that “having the huge bus station you would need at Marble Arch would completely desecrate a very important place to people in Britain.”

Of all the feeble excuses anyone can come up with allowing Oxford Street to remain a sewer for motor vehicles of all types, this has to be one of the feeblest.

In any case, if London was civilised for cycling far fewer people would need to use such a cumbersome, inefficient and high polluting mode as a bus.

London TravelWatch isn’t keen on getting rid of buses either, but, unlike toxic TfL, it at least puts forward a few modest reforms which would improve the situation:

‘We could improve efficiency of road space in this area by prioritising pedestrians and closing off more of the north and south side roads crossing Oxford Street, reducing the number of buses terminating in Oxford Street, and by restricting taxis. Taxis take up 37% of the road space, but only carry 1% of the passengers. 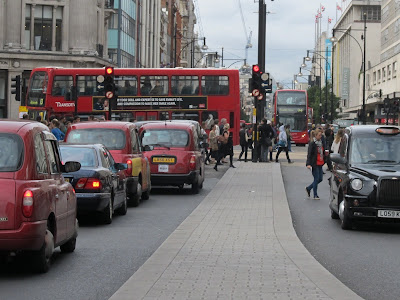 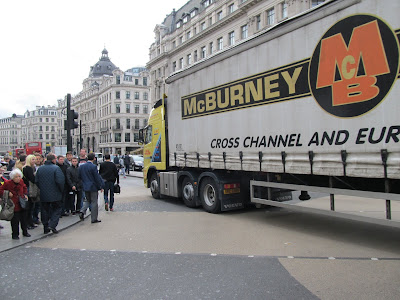 Posted by Freewheeler at 17:57