some lorries in York 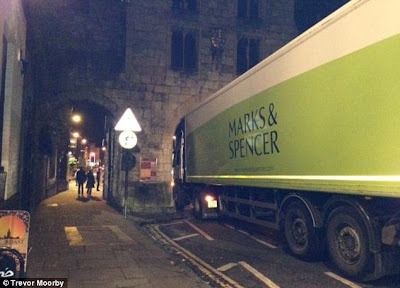 Fire crews had to cut the enormous vehicle out of the 12th century archway, after the lorry attempted to squeeze through late on Thursday.

The driver was perhaps following the advice of his SatNav, which told him the most direct southbound route out of the city from the Marks and Spencer store on the corner of Parliament Street and Pavement.

York has some of the worst traffic management of any city in Britain. Motor vehicles can access almost every part of the historic city centre. Micklegate Bar ought to be closed to all motor vehicles. A city which, with the right policies, could easily have the same cycling levels as Groningen, is totally in thrall to the internal combustion engine. The prevalence of heavy goods vehicles is just one part of York’s malaise, and underlines how cycling will never thrive in this kind of vehicular cycling environment.

(Below) Where the M & S lorry got stuck. Can you spot the cycle lane? 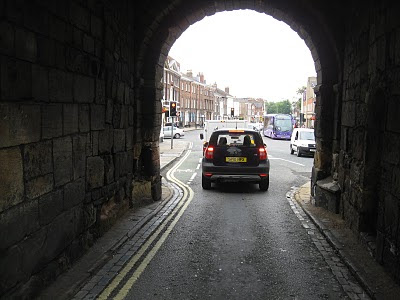 (Below) This naughty cyclist cycled through the arch and along an empty pavement to get past the stationary vehicles blocking access to the cycle lane and ASL. It is pointless condemning such behaviour if at the rudimentary level of infrastructure you prioritise motorists while still pretending to 'encourage cycling'. There's no point in cycling in a city centre if it's slow because you are held up by motor vehicles. 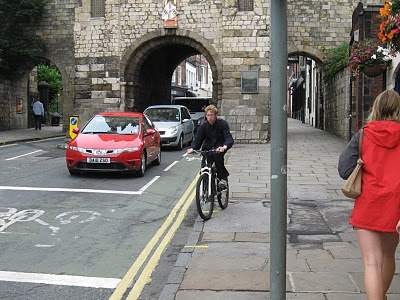 This lorry driver on Museum Street (below) is stationary and completely blocking the signalled pedestrian crossing (spot the green pedestrian signal in the background). 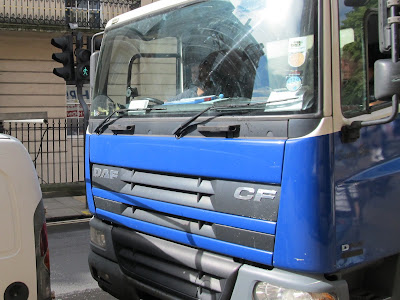 Everywhere you go in York you will encounter vehicles parked on the footway, including massive HGVs like this one (also on Museum Street). Neither York Council nor York police have any interest in enforcement. 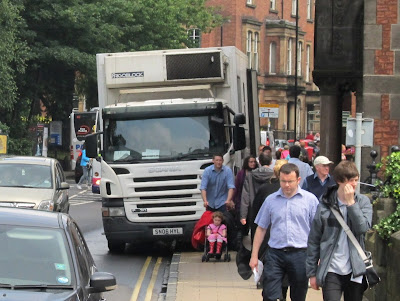 (Below) Conditions for cyclists on Lendal Bridge. 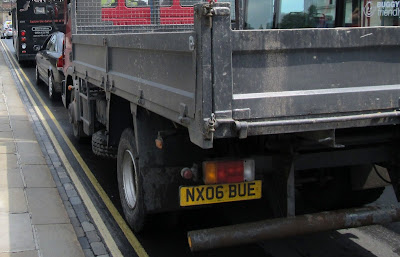 (Below) Moments after I'd taken this photograph the driver of this lorry jumped the lights and went across while the light was still showing green for pedestrians. Bootham Bar. This kind of criminal recklessness by lorry drivers is, of course, not unusual across a wide range of behaviour and reflects both the failure to enforce road traffic law and the derisory penalties handed out on those rare occasions when offenders are successfully prosecuted. 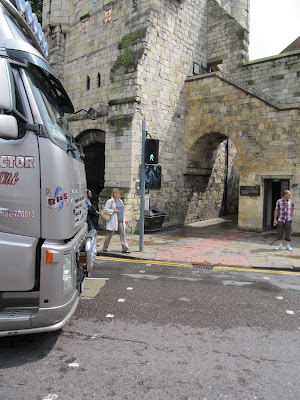 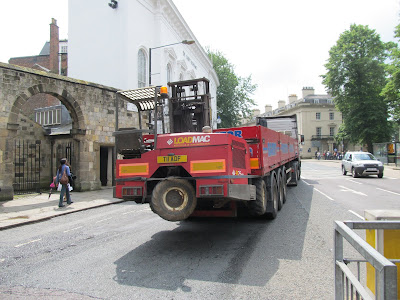 Posted by Freewheeler at 15:38