Alfred Hitchcock was born at 517 The High Road, now better known as High Road Leytonstone. His father was a greengrocer and Hitchcock was literally born above the shop, just as Shakespeare was.

Hitchcock’s movies are saturated with his childhood experiences in Leytonstone. He would wander up the road to see the travelling fairs on the open land beyond what is now the Green Man roundabout. He was an avid user of public transport, travelling all over the neighbourhood on trams, buses and trains. The family greengrocery gave him a lifelong interest in fruit and veg (watch out for it in his movies, along with shop scenes and food themes). Sabotage (1936) reconstructs the family home and locates it next door to a cinema, in an imaginative tribute to The High Road.

The worst experience of Hitchcock's early life came when his father sent him to the local police station with a note saying he’d been a very naughty boy and would they please lock him up. Which the police did. It was only for five minutes but the experience fuelled all those films about innocent men falsely persecuted or imprisoned for crimes they haven’t committed. The experience also lies behind that scene in Young and Innocent (1937) where two constables chasing after a wanted man get a lift from a carter - who makes them get in with his cargo of honking pigs. Gosh, what was Hitchcock trying to suggest?

Not far away from the family home was the grave of a victim of Jack the Ripper. Mix all that in with a strict, repressive Catholic upbringing and you have some of the central obsessions of Hitchcock’s movie-making.

Here in the London Borough of Waltham Forest we are fortunate that we have a local authority with an established record of commitment to local history, culture and the arts. A pattern of well-marked walking and cycling trails encourage visitors to explore the many local sites associated with such famous people as Samuel Pepys, John Keats, Benjamin Disraeli, William Morris, and many others. But the jewel in the crown is undoubtedly the Alfred Hitchcock Birthplace Museum. When Hitchcock’s modest birthplace came up for sale, the council of the time moved swiftly to purchase it. Today, The Alfred Hitchcock Birthplace Museum, and the adjacent Hitchcock Study Centre, draws visitors and film students from around the world, eager not only to visit the birthplace of one of the twentieth century’s greatest directors, but also to see the local sites which meant so much to Hitchcock and which energised his entire film career. These days Leytonstone is more or less synonymous with Hitchcock, with numerous streets named after the great man and his films, the prize-winning ‘Hitchcock trail’ and the world-famous Hitchcock statue at Harrow Green.

Of course some crap councils would have taken no interest at all in Hitchcock and would have allowed the house to be knocked down and the site used for a garage selling petrol and second-hand cars.

But enough idle chatter. Here is the picture you have been waiting to see. The Alfred Hitchcock Birthplace Museum on High Road Leytonstone. 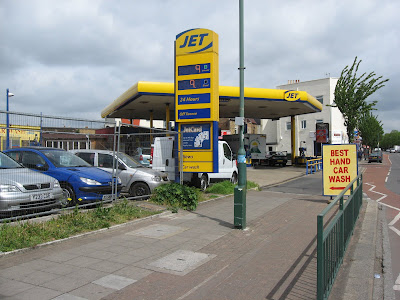 And since every picture tells a story, note the sensitively located lighting column and the railings, perfect for making mincemeat of a cyclist when a passing HGV whose driver is being 'careless' or not paying 'due care and attention' or whose vehicle is held together by coat hangers, drifts into the cycle lane. And that BEST HAND CAR WASH sign really brightens up the walking environment, does it not?
Posted by freewheeler at 09:49