Stalin, Sustrans and the Olympic Greenways 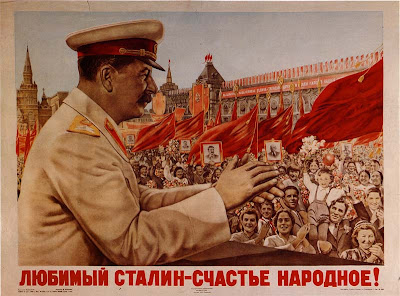 Comrades, I bring glorious news of the Waltham Forest Greenways!

Greenways for the Olympics And London (GOAL)

Greenways for the Olympics And London (GOAL) aims to improve the lives of all who live in or visit London by creating a safe and attractive environment for walking and cycling. This will enable people of all abilities to choose to walk and cycle for more of their everyday journeys, benefiting both their health and the environment.

We originally put forward the GOAL proposal in 2005, shortly following the announcement that London had been selected to host the 2012 Olympic Games. And we still use GOAL as an umbrella term for all of our route development work in London. This includes the six London Connect2 schemes, a range of Transport for London funded Greenway work, and the ongoing development of the National Routes within London.

Of special interest to this blog was the

This TfL funded study will scope a potential Greenways network across the London Boroughs of Waltham Forest, Newham, Redbridge, Barking and Dagenham and Havering.

It sounded fabulous. A network of connected ‘Greenways’ which would allow pedestrians and cyclists to traverse not only Greater London but also travel directly to the Olympic site in Stratford.

But when I looked at the detail in the December 2008 consultation document I started to have my doubts. I guffawed at Sustrans’s deluded view of High Road Leytonstone (and again here), I chuckled at Sustrans’s vision of the glorious Green Man roundabout, I cringed in disbelief at Sustrans’s enthusiasm for the Waterworks roundabout, and I recorded my stupefaction at Sustrans’s notion of an an ‘exemplar’ crossing of the M11 link road.

And you know what? In the latest Sustrans version of these glorious ‘Greenways’ they have all vanished! Like someone who fell out favour with Stalin they have been airbrushed out of existence. Like a cyclist as seen through the windscreen of yer average British motorist, they have become completely invisible!

The Waltham Forest ‘Greenways’ have shrunk to just three. Not one connects with the Olympic site. Only one of the three has funding, and that won’t begin until 2011. And even this Greenway will require ‘further consultation and feasibility’. That’s Greenway ‘A’, Larkswood Park to Lower Hall Lane (in Chingford). It is not a strategic route for commuter cyclists, nor is it a significant leisure route, though it claims it will one day ‘finally form part of a connection between the Lee Valley and Epping Forest—two major green corridors in the area.’ But that connection is still at the dream stage, and is not shown on any map. This Greenway appears to involve sticking cycle lanes in a couple of parks and diverting cyclists along some back streets. Hardly a super highway. And by the time the Olympics begin there will evidently be no new cycle route leading to the site from Waltham Forest.

What's more, the small print of the body funding this particular Greenway cautions that

Constraints including geographical / landscape barriers, route and junction capacity and competing priorities for space must be allowed for.

And we all know what 'competing priorities for space' means, don't we? Car parking and motor vehicle traffic flow will always take priority over cycling and walking.

One other thing interests me about the latest version of the Sustrans ‘North East Greenways Study’. Sustrans carried out a six week consultation:

The consultation document, along with a questionnaire, was sent to 259 key groups and individuals in the study area, senior borough councillors and members of relevant borough committees, the heads of relevant council departments, representatives of Friends of Parks groups and local walking, cycling and disability groups, relevant officers within Transport for London and representatives of regional and national level walking, cycling and disability campaign and advocacy groups.

You would expect a good response from such targeted individuals and groups, yet only 70 consultation responses were received. 189 couldn’t be bothered to reply. (The wording of the document is ambiguous. It may mean that 259 'key groups and individuals' were contacted plus all those other individuals and groups, in which case the response is even worse.) It suggests either that, in the case of paid officers, they were not doing their jobs, or that, in the case of local environmental groups, they were sceptical of the whole exercise and just couldn't be bothered to respond.

If you have the stomach for it, you can read the latest version of the document here.

In the meantime I can’t help wondering, in the glorious world of Sustrans and GOAL and Greenways and Connect2 and Green CRISP and CRIM, why is local walking and cycling such crap?
Posted by freewheeler at 08:32