Obstruction of a cycle crossing facility 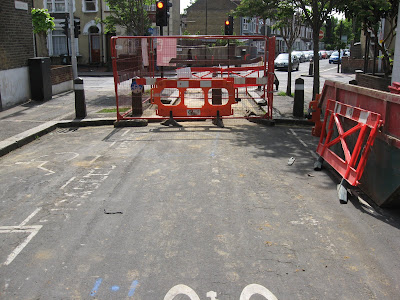 This is the signal controlled cyclists-only crossing which cuts across Blackhorse Road E17 between Maude Road and Glenthorne Road. I've blogged about it twice before, once to note the council's failure to cut back the tree, which was obstructing the crossing signals, and once to mock Sustrans for labelling it a shining example of cycle design. Its value is limited by a major design flaw, which is that at certain times the traffic on Blackhorse Road backs up across it, in both directions. The council could have prevented this by introducing yellow-cross hatching, making it an offence to obstruct the crossing. But there are no markings. Obstructing a cycle crossing isn't important to anyone, you see, apart from cyclists. (See my pics here.)

On Sunday when I went to use the crossing I found it blocked. Clancydocwra had dug a trench in one of the dual lanes. They could have fenced it off and kept the other lane open but instead they chose to block both lanes. There was no advance signing in either direction to warn cyclists that the crossing was unusable. You can get off your bike and walk past, of course. But by fencing off an unneccesarily large area Clancydocwra made it impossible for the lights to change from the Maude Road side, because they had blocked off the area covered by the sensor.

This sort of thing is just another symptom of the way in which cycling is regarded as a fifth-rate transport option. Motorists are given advance warning of roadworks, road closures or diversions, often by signs placed obstructively in cycle lanes by thick, inconsiderate contractors. But cyclists don't merit signs or advance warnings. 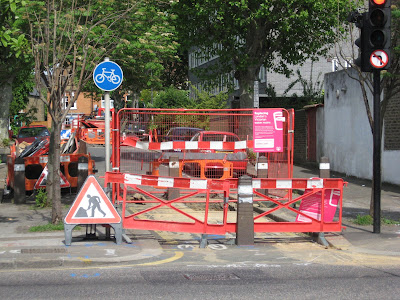 (Below) Similarly, when Clancydocwra blocked the contraflow cycle lane on Pretoria Avenue E17 for a period of some six weeks, there were also no advance warning signs for cyclists. Parking bays on the left, contraflow cycle lane in the middle going towards oncoming traffic in the right lane. The contraflow lane was blocked between Lime Street and Longfield Avenue, i.e. along more than half of its length. 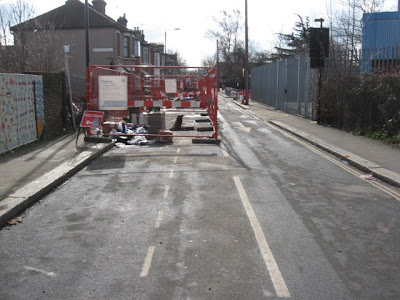 After that job was done, THIS appeared on Pretoria Avenue (below). Wheelchair users and people pushing double buggies who are unable to get past this sign should divert into the road. And if you have trouble negotiating the kerb, that's your fault for not travelling by car. 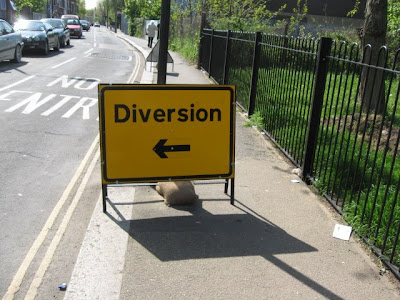 Posted by freewheeler at 08:28