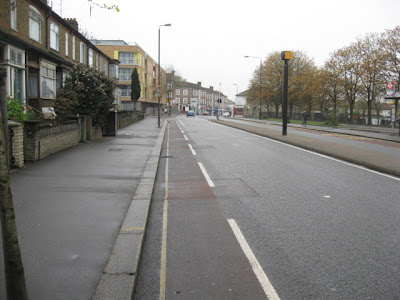 The figures, published by the National Audit Office, show that 646 pedestrians and 136 cyclists were killed in 2007 - most on roads with a speed limit of less than 40mph. Critics of the cameras welcomed the study, which they claimed showed the speed traps were a 'dangerous distraction' to drivers.

It’s a very devious piece of news presentation because it falsely insinuates that the NAO report is responsible for that first sentence, whereas in reality this is the spin that one individual not associated with the NAO has chosen to put on it.

As an interpretation it’s an absurd, irrational and completely untrue summary of the NAO report (which you can read in full or for its conclusions here).

It is more difficult to identify the factors which lead to accidents as they are complex and varied.

However, the NAO report does identify a correlation between lower vehicle speeds and safe walking and cycling:

Collisions with vehicles travelling at more than 20 miles per hour increase the severity of pedestrian and cyclist casualties.

The Daily Mail is thus grossly misleading its readers. In any case, Safe Speed is not a ‘road safety campaign group’ but rather a boy racers' club masquerading as a road-safety campaign.

Safe Speed used to be run a crank named Paul Smith. Since Smith’s premature death it is run by his partner. It is not a group, it has no formal membership, it holds no meetings. The views of Safe Speed are no more significant than those of a blogger. But Safe Speed peddles a message which those with a vested interest in promoting car ownership and fast cars are interested in publicising. No journalist ever thought to ask Smith why his personal life became consumed by a one man mission to oppose speed cameras. What were his own convictions for speeding? None of the supine, road-death-promoting journalists of the Mail, Express and BBC News ever bothered to ask. And when I contacted the BBC and asked what the speeding convictions were of those BBC journalists who chose to publicise the irrational and extremist views of Safe Speed, the head of BBC News, Helen Boaden, was most indignant and refused to answer.

Despite endless attempts by the media to trivialise it, an RAC survey reveals that 62% of drivers still regard speeding as a serious offence. Even more surprisingly, as many as 82% of British people surveyed approve of speed cameras, and that percentage has risen slightly since the mid-1990s. There is a genuine silent majority here, which is rarely represented in the media.

The notion of what constitutes a distraction for a driver is an interesting one. As we know, the government, the police and the judiciary are relaxed about people texting or phoning while driving. Whereas people who leave flowers at the site of a fatal crash are now increasingly having them removed

amid fears they are a hazard.

The authorities are worried that items such as flowers distract drivers

These same authorities have no qualms about advertising which is explicitly designed to catch the attention of passing drivers. Cycling along Selborne Road E17 today I came across this gigantic distraction, ironically located inside the town centre Alcohol Restriction Zone. 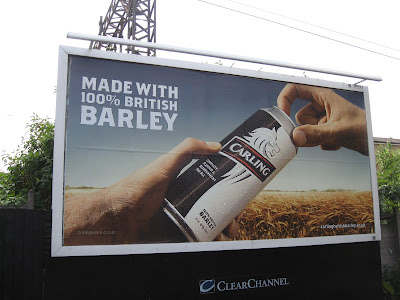 Posted by freewheeler at 14:15