How safe is London for cyclists? 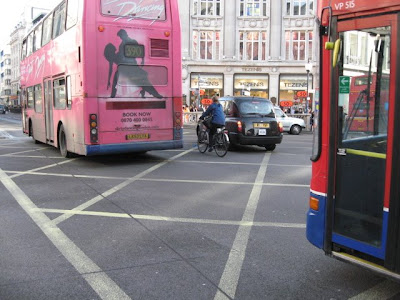 (Above) Oxford Circus. Spot the cyclist.

(Below) The cycle lane where the A112 approaches the junction with the A104. Is it any wonder some people won't cycle because they perceive it as unpleasant and dangerous?

London has seen a 91% increase in cycling since 2000 and a 33% fall in cycle casualties since 1994-98. This means that cycling in the capital is 2.9 times safer than it was previously.

Ironically, on the same day the CTC issued its press release the Guardian reported that the most dangerous place for cyclists and pedestrians is London.

So who is right?

Definitely not the CTC, which should be ashamed of itself for producing such a shoddy analysis.

It’s also depressing that sites like Bike Radar uncritically recycle the CTC’s claim that London has seen a 91 percent increase in cycling since 2000 and a 33 percent fall in cycle casualties (going on absolute numbers) since 1994-98.

The first statistic is bogus, which makes the comparison meaningless. Where does that statistic come from? Transport for London. And we’ve seen it in previous incarnations:

2007: The number of people cycling in London has risen 83% in the last seven years, mayor Ken Livingstone has revealed.

But what was measured was not ‘cycling in London’ but cycling on ‘key routes’. And now the figure has risen to a 91% rise in cycle journeys on the city's major roads since TfL was created in 2000.

What is being measured and how? Which 'major roads'? What time of the day and year is the count taken, and for how many hours? How is the count made? The cycling establishment across the spectrum is so intoxicated with this 91% figure that it seems no one has ever bothered to ask. Is this figure arrived at by monthly cycling counts, which are averaged out across the year? Precisely which routes are being measured? How many? Twenty? Sixty? Four hundred? These are important questions but search for answers and you won’t find any.

What kind of cycling is being measured by TfL? Most probably, commuter cycling.

The CTC itself supplies categories of cycling:

Even these categories are fuzzy (not all business cycling involves commuter cycling).

I am quite prepared to accept that commuter cycling has risen significantly in recent years. But has ALL cycling in London? No one knows because no one has ever measured such a broad and elusive phenomenon. To arrive at a reliable figure you would need to measure cycling on minor roads as well as routes which certain categories of cyclists can’t avoid using. To get a true picture of cycling in the capital you would need to measure it on all the different kinds of road and road conditions which cyclists have to experience. TfL is not doing this. TfL is also keen to extract the conclusion that a 91% rise in cycling is attributable to the glorious improvements to London's cycling infrastructure. This is delusional, I think. Any rise in cycling is, I believe, despite the policies pursued by TfL and government, not because of them. If I want to cycle into central London I am restricted, by an accident of geography (the marshy Lea Valley) to four routes, three of which are A roads and classifiable as 'major routes'. Even the fourth route (Coppermill Lane) eventually exits on to an A road. So TfL's counting might, in theory, register me cycling past. And I would count as a happy bunny whose cycling is the consequence of wonderful TfL and its brilliant cycling strategy. But, as you may have noticed, I am not a happy bunny.

My suspicion of the 91% figure is deepened by this particular local count made by the London Borough of Waltham Forest:

So far from there having been a massive surge in cycling on this route, cycling has fallen to below the level measured nine years earlier. The reasons are not hard to seek. The approach roads are filled with large volumes of traffic. The underpass system is lonely and threatening. The cycle lanes in the underpass are frequently covered in broken glass. The exit lanes are lethal and bring you suddenly out into fast-moving traffic with no advance warning to drivers and no physical protection from them if they are in the cycle lane. In the underpass there’s also the occasional rat.

If you were to measure cycling on other hostile routes I strongly suspect you would also find stasis or a decline. But no one in the world of UK cycling is interested in measuring failure.

We would like to see meaningful statistics being used to measure modal proportions and cyclist numbers. These should be done from actual counts. If there are variations due to weather on a particular day, the counts could be done on further day, or a factor put in to adjust for expected weather conditions…This is better than generally talking about cycling figures from different sources.

I couldn’t agree more. But there seems to be an absence of detailed local measurement of cycling which would allow plausible conclusions to be drawn about something as broad as ‘cycling in London’.

The CTC’s thesis is that the more cyclists there are, the safer cycling becomes. David Hembrow is unimpressed by this argument:

While Britain's overall safety record is comparable with that of the Netherlands, British cyclists experience about four times the level of danger. Increasing their numbers will lead to the UK's overall casualty rate worsening. "Safety in numbers" is as much wishful thinking as anything else. If Britain is to grow its rate of cycling and improve its safety then it needs a radical change to the way that planning is done. Cycling needs to be both attractive and genuinely safe. Reliance on the myth of "safety in numbers" will not make cyclists safe on unsafe roads.

Me, I prefer David Hembrow's analysis to that of the CTC.

That said, I don’t think it’s particularly helpful for anyone to quantify road danger simply by statistics. Let me give an example of what I mean:

Shawcross asked the Mayor for statistics about cycling accidents at the Elephant. "In the last five years for which there is finalised data (i.e. 2003 to 2007), there were a total of 68 pedal cyclist casualties at the two Elephant and Castle roundabouts and the short section of link road between," replied Mr Johnson. "Of these, five were seriously injured and 63 were slightly injured; there were no fatalities ... For the five seriously injured cyclist casualties, four were injured at the northern roundabout and one at the southern roundabout."

That was November 2008. Just over four months later, on 9 April, Meryem Ozekman, an experienced local cyclist who regularly cycled here, was crushed to death by a heavy goods vehicle. Statistically she was not at risk of dying; in the real world, she was and she died. Are we seriously supposed to believe that cycling at the Elephant and Castle is 2.9 times safer than it used to be? That's the logic you can extract from the CTC argument.

The safety of a cyclist is very much in the hands of the rider in question. An experienced, competent cyclist who practices skilled road-craft and judgement of a similar standard to police traffic riders, is likely to experience a very safe cycling career indeed.

A careful cyclist cannot meaningfully measure by statistics the risk they are exposed to on the roads. It is ultimately a matter of chance – of being in the wrong place at the wrong time. The roads are filled with very dangerous drivers and the streets are full of evidence of crashes. But only a minority of crashes involve physical injury or death. And when a car or cars collide it is a matter of chance whether or not a pedestrian or a cyclist is in the vicinity. If they are, they may die or be injured. A minute earlier or a minute later can make all the difference between a collision or no collision, between injury or death or another day of cycling. All kinds of random factors influence whether or not cyclists will be affected by the very considerable road dangers which are all around them on the capital's streets.

CTC President Jon Snow said: “My own experiences as a regular cyclist tell me that London’s streets have started getting a lot safer, thanks to the growth in cycling over the past decade.”

Speak for yourself, Jon. My experiences tell me that London is a very, very dangerous city to cycle in. But then I cycle in a completely different part of the capital to Snow, with different road conditions.

I also think London is not only becoming more dangerous to cycle in, but also more stressful as a cycling environment. I am an experienced, confident cyclist who has no interest in seeking confrontation with drivers. But my safety is put at risk on a regular basis by impatient drivers, reckless drivers, and, from time to time, astonishingly bellicose and aggressive drivers who use their vehicles as a weapon to threaten and intimidate. The level of hostility a cyclist in London can experience is extraordinary.

I do not myself believe that cycling in London is going anywhere, and those who think there is going to be a massive surge in cycling in the capital are deluding themselves. The cycling infrastructure is mediocre, there is a subculture of antipathy towards cyclists and cycling, and the roads are crammed with drivers who are inconsiderate or blatantly breaking road traffic law, sometimes aggressive, contemptuous of anyone but themselves in their cushioned bubble of metal. Such drivers benefit from the general absence of road traffic law enforcement by London’s mediocre car supremacist police force, from a judicial system which is institutionally lenient towards those who with wilful recklessness operate dangerous machinery (i.e. motor vehicles), and from a mass media which marginalizes road violence and anti-social behaviour and usually identifies it, at best, as ‘an accident’.

David Hembrow says If subjective and social safety are improved then people will cycle. They will want to. And so they will do it. He’s right, of course. But neither are being meaningfully addressed in London. Far from getting better, my local cycling environment is getting worse. The London Borough of Waltham Forest does not encourage me to cycle by creating new parking bays and moving the cycle lane out into the flow of speeding traffic like this lethal new lane on the A503, created just two years ago: 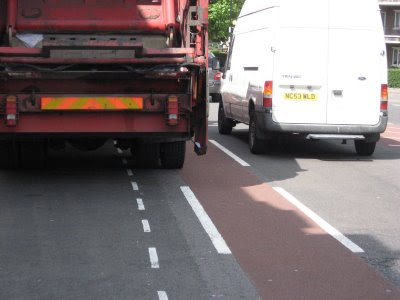 The emphasis must now be on tackling the fears that prevent people from cycling more or not cycling at all. This can be done by: improving driver behaviour, creating more welcoming and cycle-friendly streets and giving people the confidence to cycle more. This will be good not only for our health, but also for streets, communities and the environment.

True, but these are banal platitudes unless accompanied by some meaningful programme of action. And there is none. And I think in London the situation is even worse than David Hembrow's thoughtful analysis suggests. One of Hembrow's fundamental solutions is segregated off-road cycle lanes. But this is rarely practical in London because the land for it just isn't there. To introduce such lanes would require getting rid of on-street parking and radically restructuring London's highways in a manner wholly unacceptable to the Labour Party, the Conservative Party or the Liberal Democrats. The road lobby is vastly more influential in determining transport outcomes than organisations such as the CTC or LCC. Which is another reason why cycling in London is going nowhere. Especially not under a Mayor like Boris Johnson, who is the friend of the driver, not the cyclist or the pedestrian.

(Below) What the London Cycling Campaign defines as an exemplary facility - a cycle lane leading to an Advanced Stop Line. Unfortunately these facilities are comprehensively abused on a daily basis by drivers. 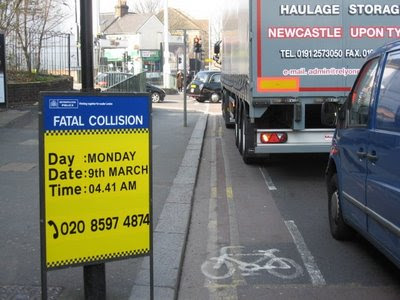 (Below) Oxford Circus. A 4X4 driver overtakes a cyclist, ignoring the sign CYCLISTS, BUSES, TAXIS ONLY. 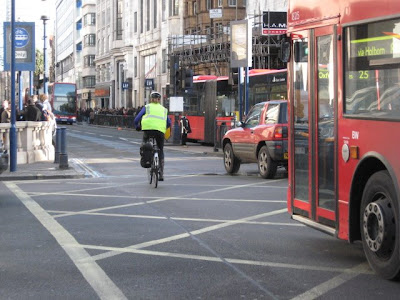 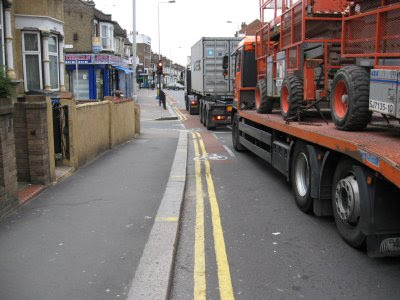