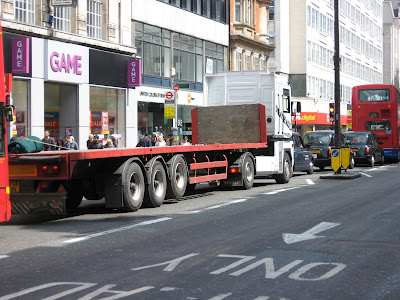 
What could be a more eloquent sign of the vacuity of 'road safety' as an ideology than the government's failure to ban the use of hands-free mobile phones by drivers, or the total silence of senior police officers on the subject?

Yesterday on Oxford Street I spotted this hands-free mobile-phone-using HGV driver. I think he was breaking the law by driving on Oxford Street (this section between Oxford Circus and Tottenham Court Road is, as far as I'm aware, restricted to cyclists, buses and taxis only). But even though articulated lorries are involved in the majority of London cycling fatalities, this driver was free to chatter on a hands-free mobile for as long as he liked.

Research has shown that any conversation taking place in the vehicle is a major distraction, with drivers’ concentration levels reduced for an average of 10 minutes after the conversation has ended. However, despite the delayed reaction times, it is not illegal to have a hands free mobile conversation whilst driving. Consequently it was viewed as a ‘safe activity’ by people taking part in the research study.

Direct Line has found that 22% of drivers have made calls on a hands-free mobile whilst behind the wheel in the last year.

Maggie Game, head of car insurance at Direct Line, said: “Given that drink driving was responsible for 14,480 casualties, including 460 deaths, on the road in 2007, the potential for casualties from mobile phone use is frightening. Whilst serious injuries and death on the road as a result of drink driving are decreasing, the potential for mobile phones to be a contributory factor in serious road accidents can only increase.”
Posted by freewheeler at 08:15