How many years does it take a cycling officer to change a light bulb?

I don’t know. But recently I was clearing out some files which included old cuttings from the local paper. Among them was this choice item: 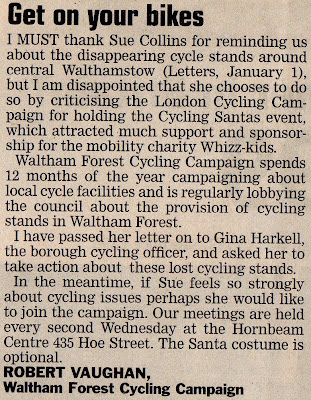 The letter is from the issue of the Waltham Forest Guardian dated January 29, 2004. And how many of the missing cycle stands which Ms. Collins complained about have been restored in the five years and three months which have elapsed since that time?

None. Not a single one.

I borrowed some of the information from Ms. Collins’s original letter and added some missing stands of my own back in September 2007, noting That's a grand total of 15 cycle stands which have been removed. Since that date I can add two more. This cycle stand in the Town Square has now vanished. And this one on Hoe Street was removed last September and has never been put back.

So that’s a total of 17 cycle stands which have vanished from central Walthamstow.

And now here's a song about cycling infrastructure in London.

Posted by freewheeler at 07:10