More on that Boris near-death experience 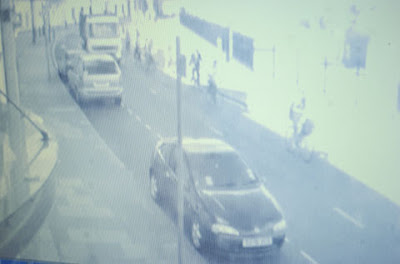 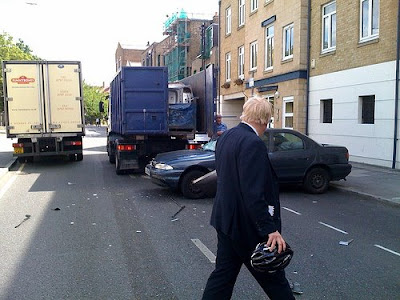 Above picture credit: Nic Price (AKA ‘Beatnic’) who has another pic here and who comments

The mayor and an entourage - about 10 cyclists or so - were looking at options for a new cycle route - as a curious fellow cyclist I tagged along as I was on my way in to work in Canary Wharf following the same route.

The back doors of the lorry flew open as it overtook us and the bolt on the right-hand door picked up a parked car through its front windscreen and swung it round at head-height, brushing past a few of the cyclists and then landing it back on all four wheels a little further down the road.

Comments elsewhere which interest me are these:

(i) Looks a lot like the truck driver was travelling at a negligent speed - the doors clearly came unhooked as a result of his passing over the speed hump at a considerable pace.

I saw the footage on BBC News, there wasn't enough room for the lorry to safely pass. its crazy that drivers are allowed to get away with this kind of recklessness on a daily basis. It’s bigger fines and longer jail terms are needed, as well as cycle lanes.

Just curious why the Mayor was reviewing routes in Limehouse and didn't invite Tower Hamlets Wheelers the local campaign group along, we could have shown some of the major problems in that area.

I am sure everyone who cycles along Narrow street in Limehouse daily like me is not surprised of what happened today. Daily, we see crazy lorry and van drivers going full speed downhill, invading the opposite lane even in the narrowest bit of the street where there is little visibility of whoever comes in the opposite direction or might be just in front and riding a bike at much lower speed.

Since, amazingly, no one was injured, this crash will not enter the casualty statistics for 2009, by which ‘road safety’ is measured. And so this road will ‘scientifically’ be established as safe.

Me, I think this incident simply underscores what I wrote just 10 days ago:

A careful cyclist cannot meaningfully measure by statistics the risk they are exposed to on the roads. It is ultimately a matter of chance – of being in the wrong place at the wrong time. The roads are filled with very dangerous drivers and the streets are full of evidence of crashes. But only a minority of crashes involve physical injury or death. And when a car or cars collide it is a matter of chance whether or not a pedestrian or a cyclist is in the vicinity. If they are, they may die or be injured. A minute earlier or a minute later can make all the difference between a collision or no collision, between injury or death or another day of cycling. All kinds of random factors influence whether or not cyclists will be affected by the very considerable road dangers which are all around them on the capital's streets.

London cyclists are daily exposed to danger and the threat of serious injury or death by risk-taking drivers who ought not to be on the roads. But those risk-taking drivers are protected by the structures and institutions of our society, which include the Metropolitan Police (corrupted by car supremacism at the highest levels, obsessed by theft of or damage to vehicles and largely indifferent to lawless and dangerous driving), the judicial system (which treats the wilfully negligent use of lethal machinery as a trivial matter) and the corporate mass media (which designates road crashes as ‘accidents’ and rarely regards them as being newsworthy, thereby trivialising widespread anti-social behaviour and extreme violence).

Unfortunately cycling campaigning in Britain lacks a holistic approach and evades what might be called the politics of cycling.

We need (to give just one example) mass cycling protests outside courtrooms, to protest about those judges and magistrates who let killer lorry drivers breeze out of court with a small fine, or who claim that cyclists who are run down and killed without a helmet are guilty of ‘contributory negligence’.

I would argue that cyclists are treated very badly in London because cycle campaigning is supine and ineffective. Energy is frittered away reporting potholes and lobbying for cycle stands. The solution lies with London’s cyclists. Read the comments boxes on blogs and newspapers and it’s plain that there are lots of angry cyclists out there. But, as yet, that anger is not being channelled into any effective campaigning.
Posted by freewheeler at 22:10