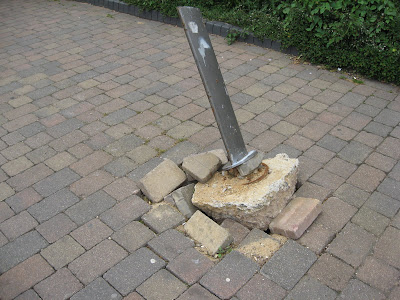 There are now thought to be around 80 million rats in Britain, a rise of more than 200 per cent since 2007.


The Selborne Road approach to the pedestrianised Town Square, Walthamstow, is lined with demolished bollards, which are a tribute to the spectacular skill some drivers display in colliding with stationary objects (although obviously the bollards must bear some responsibility for not wearing helmets and luminous yellow jackets).

Funnily enough as I approached this bollard on Thursday a rat came whizzing out of the grass area beside the cycle stands, saw me, and dived into the gap underneath the bollard. It then emerged on the far side, its nose pointing out, eyeing me with its beady eyes, assessing what kind of a threat I posed. It decided I wasn't worth bothering with, emerged, and then scampered into these bushes (below) next to The Mall. It all happened too fast for me to get a picture of the brute.

I only mention this because that Orwellian contraption nearby known as The Big Screen, which has spent the past year broadcasting the weather forecast and the semi-finals of the Belgian netball second division league, will soon be showing a complete opera. Local residents are urged to 'picnic in the square and watch'. And who would not want to unfold a mat on a waste of concrete, take out their sandwiches, and gaze in rapture at a gigantic figure emoting in Italian? I merely caution spectators to watch out for anything which might appear and want to nibble their sandwiches or their toes. 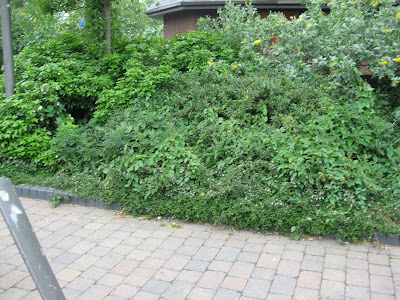 Posted by freewheeler at 14:09