Excuse me for not being immensely excited 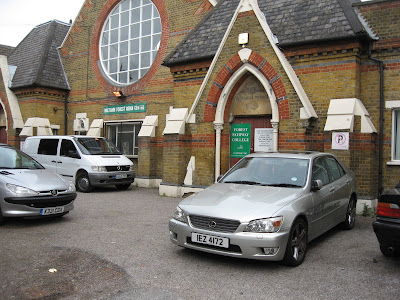 A FILM on climate change is to be shown in Walthamstow as part of a nationwide initiative. "Age of Stupid", which stars Pete Postlethwaite OBE, will be screened by Transition Waltham Forest, a movement set up to address the issues of climate change and fossil fuel dependence in the borough. The film is to be shown simultaneously with a number of other community screenings across the country, on May 22 at the Asian Centre, Orford Road, Walthamstow.

Paul Gasson, an IT manager of Walthamstow Village and a member of Transition Waltham Forest, said: "We’re immensely excited about being able to show this groundbreaking film in Waltham Forest before it comes out on DVD in July. The film graphically brings to life why we need to act now to stop climate change." Fellow member Olivia Sprinkel, 35, a communications consultant of Howard Road, Walthamstow, added: "Transition Waltham Forest launched in October and since then we've been working on building a network of grassroots projects. Our focus over the next year is to engage as many people as possible in Waltham Forest with the idea of telling them what they can do on a practical level."

I hate environmentalists who TELL other people what they have to do to save the planet.

Climate catastrophe is not going to be prevented on a voluntary basis by individuals doing good deeds. For example, if you get rid of your car in the London Borough of Waltham Forest all you do is free up space and assist the on-street parking requirements of those households who can’t survive without owning three or four cars. In 1991 43 per cent of households in the London Borough of Waltham Forest didn’t own a vehicle. That impressive base was destroyed by the car supremacist transport policies of the Blair government and those of the local Labour council. Within ten years the figure had dipped to 39 per cent, while the number of three-vehicle households had jumped to 24 per cent. Some of this rise in vehicle ownership was achieved by converting local pavements into car parks, making the walking environment more unpleasant and encouraging more people to travel by car. This process is continuing to this day.

This film is going to be shown at the Asian Centre (shown in the photograph above). In all the years it has existed the Asian Centre has had car parking but not a single cycle stand. In this, the Centre is no different to all the other premises on Orford Road, including the pubs, restaurants, shops and Walthamstow Constituency Labour Party headquarters. That’s right, Orford Road, where £20,000 was spent celebrating ‘Car Free Day’, lacks even one cycle stand. The same applies across the Village generally. Including the Council’s Vestry House Museum.

The very name Transition Waltham Forest makes my heart sink. It sounds like a typical New Labour-style piece of froth, strong on glitter and spin, utterly devoid of meaningful delivery. And what exactly IS the Transition Network? Who are they and what do they represent? The organisation's website has a vaguely evangelical feel. It strikes me as wishy-washy stuff, fizzing with goodness but lacking in concrete ambition. Look at what it has to say about transport or cycling, for example. Nothing at all, other than a few banalities. And yet how we get around cities is one of the causes of climate catastrophe and one of the ways in which it could be combated. But I am not remotely optimistic about the future. In London the car is king and cycling and walking remain marginalised, and I see nothing to suggest that that is going to change in the next ten years. Nor is this imbalance ever going to be addressed on an individual basis. Only national and local government can significantly influence transport modes, through concrete policies such as street design, taxation, the cost of fares on public transport, etc. But decide for yourself and check out the Transition site here.
Posted by freewheeler at 14:15