The most dangerous road for Edinburgh's cyclists 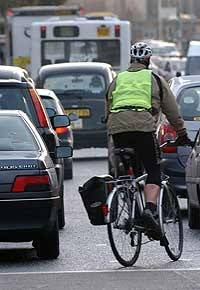 
THE most dangerous road for Edinburgh's cyclists is today revealed, as new figures show there has been a dramatic rise in the number of accidents involving those on two wheels. Ferry Road, the scene of a hit-and-run earlier this year, tops the list as the street where cyclists are most likely to be injured.

There were 11 accidents involving cyclists there in the past year, two of which resulted in serious injury. The figures include a hit-and-run in February, which left 38-year-old nanny Seria Ullah needing plastic surgery for serious facial injuries.

A police spokeswoman said: "By always wearing a helmet and high-visibility clothing, you are doing all you can to make other road users aware of your presence."
Posted by freewheeler at 07:04