More from the archives 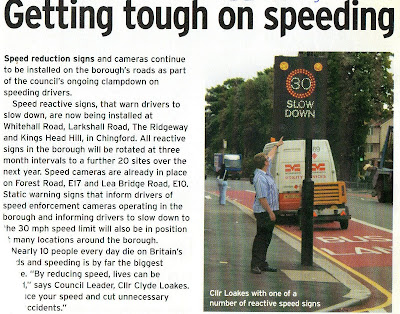 My recent file-clearing exercise yielded this cutting from wfm, dated December 2003. It shows the portly figure of council leader Clyde Loakes, pointing at a speed reactive sign, with the revelation that the new signs are 'part of the council's ongoing clampdown on speeding drivers'.

Now these advisory signs, which are solar powered and flash when a driver exceeds the speed limit, are better than nothing at all, but in no sense do they involve GETTING TOUGH ON SPEEDING or form part of a clampdown. A driver who chooses to ignore the sign suffers no consequences. In reality these expensive signs are just another symbol of the blood-drenched farce of the road safety industry, and how road safety ideology is cynically designed to create the appearance of dealing with road carnage while evading its causes and permitting it to continue.

For example, these signs do not contain a counter registering how many drivers are speeding over a 24 hour period. The results would be too embarrassing, of course. Just go along to the solitary speed reactive sign on Fulbourne Road E17 and watch it flash hundreds of times a day as drivers flout the 20 mph limit and speed past two primary schools. The same thing occurs on Fairlop Road E11. If you want to stop drivers from breaking the speed limit three things need doing (i) stop building cars designed to break speed limits and which encourage drivers to break speed limits (ii) fit the technology which forces vehicles to obey speed limits (iii) introduce severe penalties for speeding instead of treating it as a minor offence which can be indulged in four times before the driver loses their licence. Needless to say the influence of the road lobby ensures that such solutions are literally inconceivable in any political party apart from the Green Party.

As usual with this crap council, once the spin has glittered and faded, and once the froth has popped, the reality kicks in. And the reality is that most of these signs no longer work. Forest Road, Chingford Road and Lea Bridge Road all have speed reactive signs which gave up the ghost years ago. To be honest, I don't think anyone in this crap council has even noticed. The one shown below, on Lea Bridge Road, is just one of very many non-functioning signs. It's been pushed round and the speed sensor is not even pointing in the right direction. The money wasted on these ineffective signs must have been phenomenal, but who cares? They created the false impression that speeding was being tackled on these fast major roads, when it wasn't. Drivers still race down them and crashes still regularly occur.

As for Clyde Loakes. He has just stood down as Waltham Forest council leader in order to fight a Conservative seat on behalf of Labour. Clyde shrewdly realises that at the next general election there is going to be a massive swing to the party of the brilliant and charismatic Gordon Brown. Ominously, Clyde says “Everything I have learnt over the past 6 years as a council leader in Waltham Forest, I know I can put to work for the benefit of the town and people of Northampton.” And what a record of achievement! 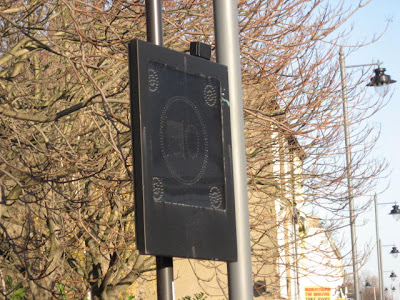 Posted by freewheeler at 07:57