Boris Johnson gets lost while cycling to Walthamstow

I must admit that when I heard that the Mayor of London, Boris Johnson, had turned up by bicycle for a meeting at Walthamstow Town Hall, I was extremely sceptical that he’d cycled all the way from City Hall. I pictured him taking the train from Liverpool Street Station (just an 18 minute trip) and then cycling the short distance from Walthamstow Central. Or coming by taxi to the Conservative Club and then using a borrowed bike for the even shorter distance to the Town Hall.

But it turns out my cynicism was wholly unjustified. Boris really did cycle all the way.

LONDON Mayor Boris Johnson was spotted in Broad Lane, South Tottenham, after getting lost on his way to Walthamstow. Mr Johnson was seen looking flummoxed and asking for help opposite the BP petrol station.

Boris might well be ‘flummoxed’ because he had missed a number of (relatively) quiet cycling routes to Walthamstow. He could have peeled off the A10 to Lea Bridge Road – there are numerous possible routes – or continued on to the junction with Stoke Newington Church Street, then turned right onto Northwold Road, then left on Osbaldeston Road – admiring en route the various contraflow systems for cyclists installed in a residential area by a local authority which, in this regard, has the edge on backwards, cycling-unfriendly, one-way-street-proliferating Waltham Forest – then across the A107 down Spring Hill to the bridge over the River Lea (or Lee) and up Coppermill Lane, which leads in a straight line to Walthamstow High Street. And then get lost. Crap signing for cyclists is just one of the innumerable reasons London is light years from being a world-class cycling city.

Dave Hill quips that Alas, he sometimes has no idea of where he's going.

I didn’t think I’d ever find myself having to defend Boris, but this is unfair, Dave! Boris’s route was perfectly logical on the map. What threw him was a one-way system designed to manage motor vehicle flows and utterly different to the convenience and safety of cyclists.

Boris’s route was perfectly intelligent and on the map it looks just as good as the alternatives I’ve suggested (apart from sometimes being poorly signed, complex back street 'quiet routes' often take much longer to cycle than just sticking to main roads). What undoubtedly threw him is that that part of Tottenham consists of a giant one-way system which is deeply hostile to cycling. Broad Lane is the most direct route to Walthamstow but it’s NO ENTRY, with no contraflow. So Boris had to cycle on up the A10 and turn right on to Monument Way – a terrifying multiple-lane racetrack which requires cyclists to move over to the right to access the A503 to Walthamstow. (There's another back street route he could have used but it's complicated and without a map Boris would just have got lost again.)

His last chance of avoiding the one-way system was to turn right off the A10 into Crowland Road. How could Boris possibly have missed this magnificent choice of route (below)? 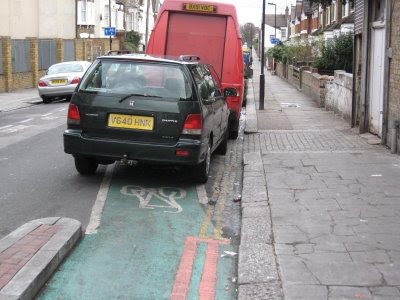 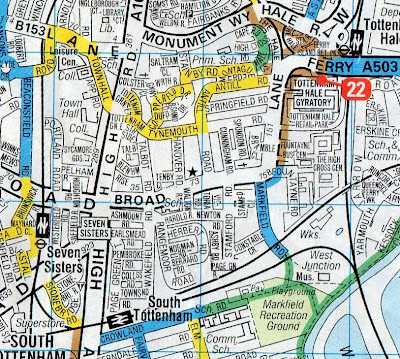 Once Boris had found his way to the A503 (shown in the top right-hand corner of the map), he would have seen that he was entering Waltham Forest, a local authority which on this road displays a high regard for pedestrian safety, and the triumph of privatised street cleaning, as well a superb ‘shared use’ cycle lane and magnificent special cycling facilities.

From there it’s not far, on a route which includes this model cycle lane, climaxing outside the Town Hall, which has its own marvellous new off-road cycle lane!

One of the many practical ways to promote cycling in London would be to introduce legislation allowing cyclists to ride against the flow on ALL one-way streets, with strict speed limits, and the automatic assumption that a driver involved in a collision with a cyclist is at fault unless they can prove otherwise. Is Boris the kind of politician who is prepared to move towards the kind of radical change that would really make a difference to cycling in London? On his record so far, I’d say not. He's an engaging and amusing eccentric, but his practical policies favour the car and the driver, not the cyclist or the pedestrian.
Posted by freewheeler at 09:03