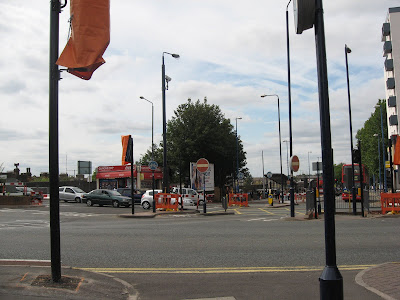 It’s happened again – this sort of blatant contempt for cyclists.

There are road works going on at the junction of Selborne Road E17 and Hoe Street and all the junction lights have been replaced by temporary ones. That is, the ones for drivers. There is no provision for pedestrians, who are expected to walk across in front of stationary traffic with no warning of when the lights will change and Joe Slob in his BMW will accelerate towards them.

As for cyclists. Cyclists have long had the benefit of a cycle lane through the road closure at the junction of St Mary Road and Hoe Street. This photograph shows it, facing west towards Selborne Road. It’s a major route for cyclists. And at the moment the cycling phase has been shut down and the lights hooded. There is no advance warning for cyclists.

Cyclists now have to cross in front of three lanes of traffic waiting at red to their right, never knowing when the lights will change, then negotiate the two lanes on the left beyond the island in the middle, then watch out for more traffic on the left which might be turning into Selborne Road. That’s six lanes of traffic you have to cycle in front of, with no warning of when the lights may change.

Anyone who thinks cycling is dangerous, risky and not worth bothering with is perfectly sane, because some of the danger and exposure to risk is institutionalised, as it is here, imposed on cyclists by contractors who are working for Transport for London and/or the London Borough of Waltham Forest. (This last body, displaying its traditional preference for spin over substance, is wasting another large sum of money next Sunday on a meaningless 'Car Free Day'.)
Posted by freewheeler at 17:27