The curious case of the speed reduction scheme which increased speeding 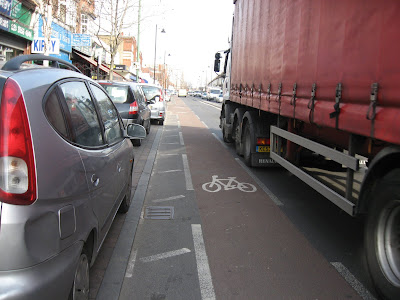 Last November, Guardian journalist Dave Hill mentioned my criticisms of Waltham Forest Council on his blog (the lighting columns shown burning brightly in the photos in the link are still burning all day long five months later, incidentally - so much for the ‘switch it off’ council’s climate change commitment).

It was followed some days later by this update:

"We are committed to improving the safety of all road users in our borough. The highway improvement scheme in Forest Road will make transport safer and reduce the number of injuries to all road users as it is designed to reduce vehicle speeds between Hale End Road and Woodford New Road.

Councillor Belam was alluding to The Forest Road E17 Corridor Scheme. Forest Road is otherwise known as the A503, a major route in and out of London, with high vehicle flows and large numbers of lorries.

Now my argument was basically that the council was creating parking bays where none currently existed, some of them on the pavement, thereby simultaneously encouraging car dependency and degrading the walking environment. It was also creating them to the left of the cycle lanes on Forest Road, forcing cyclists to cycle between parked cars (with all the attendant dangers of ‘dooring’) and overtaking traffic, including buses and lorries. Indeed, by reducing the carriageway width and moving the cycle lane out, cyclists will be forced much closer to motor vehicles than they are at present.

In brief, road space where no parking currently exists, which could have been used to construct high quality segregated cycle paths on the Dutch model, is instead being reallocated for car parking, while making cycling more dangerous and unattractive than it already is. The photograph shown above (Lea Bridge Road) illustrates what this section of Forest Road will be like once this scheme has been implemented.

Cllr Belam unequivocally asserted to Dave Hill that the scheme was

This section of Forest Road, like all the rest of it, is a 30 mph zone. Yesterday the latest issue of the Council’s heavily-subsidised propaganda rag Waltham Forest News was published. When I turned to the Traffic Orders at the back, guess what I found on p. 14. 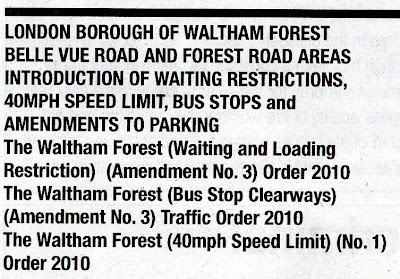 There’s no wriggle room here: Bob Belam has lied to a journalist on a national newspaper. He's a disgrace and should be sacked from a portfolio he has never been fit to hold.

What also stinks is that the proposal to increase the speed limit from 30 mph to 40 mph was nowhere in the original consultation document. It has been slipped into the Traffic Order at the last minute with no prior discussion or consultation. This is the perfect example of how the Blair local government reforms have hollowed out and corrupted local democracy by transferring power from the old public committee structure to a tiny clique known as ‘the cabinet’, where decision-making occurs behind closed doors and involves senior officers persuading individual cabinet members to agree to proposals which receive no valid public scrutiny.

Raising the speed limit at this location is completely insane, as it will simply encourage eastbound drivers to accelerate just as they approach a major junction with traffic lights. Speeding drivers will be tempted to jump the lights, with predictable consequences. And drivers heading west will now be encouraged to accelerate just at the point that they approach what will now become a 30 mph zone sited outside a school. And everybody knows that a 40 mph sign will be interpreted by many drivers as an invitation to drive at 45-50 mph.

With the Traffic Order published, there is now no possibility of appeal against this insane traffic scheme, which promotes car dependency and speeding at the expense of the safety and convenience of pedestrians and cyclists. It is worth remembering that Transport for London is a co-partner in this car-centric scheme, which will actively discourage and suppress cycling on this major route. Cycling's modal share in Waltham Forest is currently one per cent; come back in ten years and you can be absolutely certain that it will still be utterly risible. The Mayor's vision of a massive expansion of cycling in outer London is a self-indulgent fantasy which bears no relation to the continuing and very active promotion of car dependency over walking and cycling.

Even a hardcore cyclist like myself has a threshold and personally I am not prepared to cycle on an ‘A’ road in a narrow cycle lane located between parked cars and overtaking lorries, where the speed limit has been raised from 30 mph to 40 mph. In future I won’t be cycling along Forest Road, I’ll be driving. I’ve always had the option of driving a large car with airbags (it belongs to my non-cycling Very Special Person and my VSP has never been very keen on me travelling by bicycle) and in future, much as I dislike driving in London, that’s what I’ll be doing when I have to head east on the A503.

So, Waltham Forest Council and Transport for London, you win. You don’t want me to cycle and I won’t. On the A503, for my own personal protection, I'll be driving a car.
Posted by freewheeler at 07:53