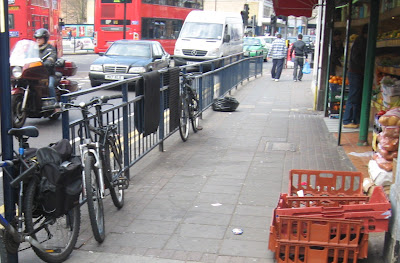 A year ago on 31 March 2009 two members of the Greater London Assembly visited the London Borough of Waltham Forest to look at cycle parking, paying a site visit to Walthamstow Central. They were Andrew Boff and Joanne McCartney. The local GLA member Jennette Arnold was not present, but sent someone along to represent her.

According to the minutes, the borough’s cycling officer, Gina Harkell, claimed that Waltham Forest had erected cycle stands on the cycle routes which covered most of the main roads in the borough. There were stands outside every four to five shops.

Which simply isn’t true. The GLA members were given a wholly false impression of the true state of cycle parking provision in the borough, which in reality is patchy, incoherent and totally inadequate.

Ms. Harkell’s preposterous claims are easy enough to measure. On Hoe Street, between Church Hill and St Mary Road, at the heart of Walthamstow, on a section of street lined with shops, independent supermarkets, restaurants, cafes and a bank, there is not a single cycle stand and cyclists are reduced to using any available street furniture or railings (like the three cyclists in the photo above).

On Forest Road, aka the A503, which runs from one side of the borough to the other, cycle stands are practically non-existent. I can think of one outside The Bell pub. I struggle to think of any others, despite the clusters of shops all along this very lengthy road with cycle lanes. For example, on the A503 there are no cycle stands between Spruce Hills Road and Fulbourne Road, even though there are many shops on this stretch of road, as well as a pub. Naturally there aren’t any outside Wood Street library, because even where something as basic as libraries are concerned the crap Labour-Liberal Democrat coalition council has dismally failed to deliver.

Even where cycling provision is at its most extensive it nowhere matches up to the figures which Gina Harkell gave the GLA representatives. I took the trouble to count the number of shops and the number of cycle stands on Hoe Street between Hatherley Road E17 and The Bell corner. There are 59 shops here, with cycle lanes on both sides, so according to Harkell there should be between 11-15 bike stands. In fact there are just seven. And by the crap standards of Waltham Forest provision that is generous indeed, even though grossly inadequate.

A few years back there was an interesting letter in the local paper from someone writing in to say that, when challenged, Ms Harkell had admitted to them that she didn’t cycle to work. There was no follow-up letter of denial. Now I don’t know if that allegation was true then, or is true now, but nothing could surprise me less than that Waltham Forest employs a cycling officer who doesn’t ride a bicycle to work every day. Not that I would blame anyone for not wanting to use the crap infrastructure which she has been responsible for in her long tenure in this borough.

This site visit for Assembly members apparently contained no input from any cyclists or cycling organisations. But then as we know the last people to be consulted on cycle design, provision and installation are cyclists.

(Below) A cyclist uses the railings by the junction with Pembar Avenue E17, because there is very little cycle parking provision by any of the shops along the entire length of the A503. 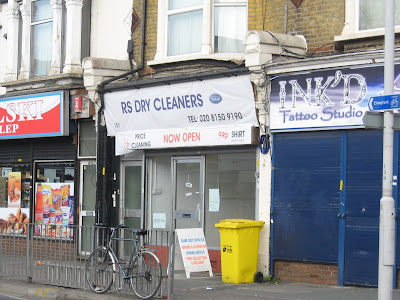 (Below) Every picture tells a story. 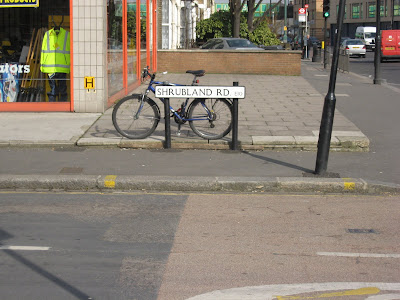 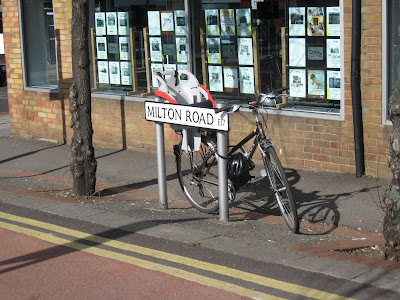 Posted by freewheeler at 13:02