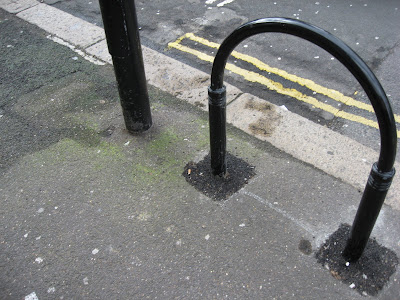 Towards the end of 2008, the Mayor of London announced a £4.6m boost to local transport in Waltham Forest, which included £20,000 for cycle parking in shopping centres

My question is a simple one. Please will somebody tell me where those twenty grand’s worth of cycle stands are, because I cycle all over the borough and I sure as hell haven’t noticed a sudden explosion in new cycle parking facilities in Leyton, Leytonstone, Walthamstow or Chingford.

Let’s have a list of how many cycle stands £20,000 will buy you, and where they have been installed. Otherwise I might end up thinking that this is another case of the mysterious evaporating finances of Waltham Forest Council.

Generally speaking, cycle stands are disappearing rather than appearing. Like the nine which have vanished from the Town Square, to the complete indifference of the three councillors who represent High Street ward. But as they obviously don’t cycle, and as they haven’t even noticed the street lamps which continue to blaze away all day long in the daytime, we obviously mustn’t wake these gentlemen from their slumbers.

The only new cycle stands I’ve spotted anywhere lately are the ones which have appeared in Walthamstow Village, on or near Orford Road, installed about three weeks ago. Two are sited outside the Italian restaurant by the Labour Party office. One (shown above) is on Wingfield Road, another round the corner on Beulah Road. The last one is at the junction with Church End. That’s five in all. So maybe that’s fifty quid each for the stands, fifty quid each to install them, and £19,500 to consultants for working out where to put them.

Incidentally, the siting of three of these new stands is crap. No one is ever going to use the one at the junction with Church End, as it isn’t by anything. It’s a fatuous token gesture. The one on Beulah Road is a bike thief’s dream at night, nicely out of sight of Orford Road’s pedestrians. And the one on Wingfield Road, shown above, has been sited far too close to that lighting column. And five stands is pathetically inadequate and only a fraction of the number of car parking bays which are supplied on Orford Road, which are of course conveniently located outside the shops.
Posted by freewheeler at 13:20