Waltham Forest Labour Party has the cheek to steal one of this blog’s photos!

Of all the bloody nerve. Waltham Forest Labour Party has borrowed one of my photographs from this blog and used it in their election literature, without my permission and, in a gross breach of copyright, printed it to attack the local Liberal Democrats.

Which I object to IN THE STRONGEST POSSIBLE TERMS.

For a start I’m planning to vote for the Green Party, and as a Green Party supporter I bitterly resent photos on this blog being pilfered by the local Labour Party and (mis)used to attack the Lib Dems.

I also wish that the local Labour Party would pay as much attention to the content of this blog as to its photographs.

Take a look at this: 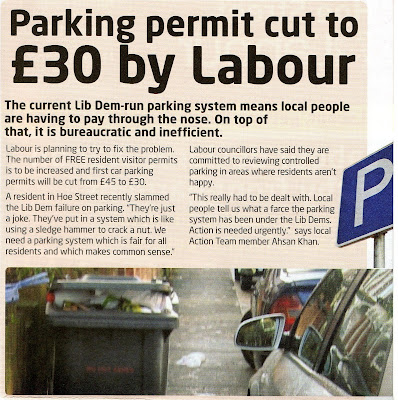 And now take a look at the second photograph here.

Waltham Forest Labour Party, in a Hoe Street ward campaign leaflet, have trimmed my photograph of Westward Road in Chingford in order to attack what they call ‘the Lib Dem failure on parking’, adding ‘Labour councillors have said they are committed to reviewing controlled parking in areas where residents aren’t happy.’

But Westward Road E4 is not in a controlled parking zone. My photograph was designed to show how the policy of allowing cars to park on narrow pavements degrades the walking environment and can result in obstruction. It has nothing whatever to do with the Liberal Democrats or their policy on Controlled Parking Zones. It was the Labour Party which created these street conditions, long before the party ever formed a coalition with the Lib Dems.

I demand an apology from the local Labour Party for their blatant infringement of my copyright and for their cynical misuse of one of my photos to attack the Lib Dems.

As I say on my blog

Campaigners for cyclists and pedestrians, the press, and all extra-terrestrials are welcome to reproduce any of these these photographs, but please include a link or reference to this blog.

As Waltham Forest Labour Party can by no stretch of the imagination be regarded as a pedestrian and cycling campaign group, and as it isn’t the press, this only leaves one possibility. But even alien life forms, no matter how primitive, should have the decency to acknowledge copyright.

Repeat: I demand an apology and a promise that this will not happen again.
Posted by freewheeler at 07:30