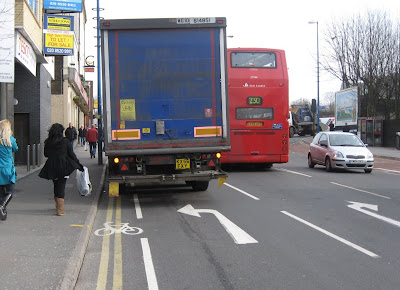 You introduce a cycle lane. And then a few years later you allow a branch of Tesco Express to open next to it. And hey presto! All day long vans and lorries make deliveries and obstruct the cycle lane. Brilliant.

Why planning permission was ever granted for the Tesco Express on Selborne Road E17 is a mystery. It certainly wasn’t needed. It takes trade away from the independent supermarket round the corner on Hoe Street and the 24 hour supermarket a bit further along. All three of the main parties claim to be friends of local business, yet when it comes to handing over more lucrative trade to a hugely profitable multinational they duly approve it.

Tesco made record profits equivalent to about £150 for every family in Britain despite falling living standards in the recession, figures next week will show. The supermarket giant is expected to reveal to the City that its total pre-tax profits grew to around £3.2 billion in the year to the end of February. Of that, about £2.5 billion was made in Britain, according to City analysts, £147 for each of the country's 17 million families.

Tesco lobbied hard against the proposed tax on supermarket car parking spaces and naturally Gordon Brown quickly scrapped it to please his City buddies. Not that Cameron or Clegg would have done any different.

When the cycle lane is blocked by a Tesco delivery vehicle on Selborne Road, all you have to do is overtake. Who can doubt that cycling is going to expand in conditions like these, in a cycle-friendly borough like Waltham Forest? 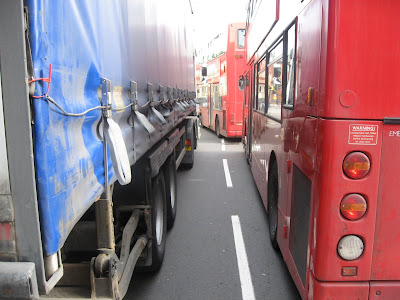 Posted by freewheeler at 13:47