Why Tom Bogdanovicz should move to Waltham Forest 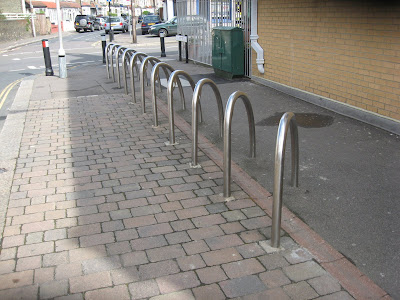 Another cracker from a leading light in the London Cycling Campaign!

It's virtually impossible to find an empty bike-parking space in London at the moment…Mr Bogdanowicz said.

Oh I dunno. I took this photo today on Chelmsford Road E17. The most bikes I’ve ever seen locked up here amounts to, er, one. There are eleven stands.

These stands are outside a mosque, where as far as I can tell everyone who worships either walks or comes by car. You can’t blame them, with the local conditions for cycling being so unpleasant. Adjacent Queens Road is one I prefer to avoid because of the speed, volume and proximity of the motor vehicles which use it, and the surrounding so-called ‘quiet routes’ involve pedalling down a strip of one-way road between parked cars on both sides, and an impatient driver behind you who can’t bear to be behind a cyclist even for ninety seconds.

If you look in the background you can see car-sick Walthamstow. That street in the distance is Edinburgh Road, where cars are allowed to park on the pavement, and a one-way system has been introduced, even though there's a road closure with cycle access at the end of it. The creation of on-pavement/on-road car parking and the management of motor vehicle flow has been put before the safety and convenience of cycling.

No one else apart from those attending the mosque would use these bike stands because they aren’t close to anything, apart from the mosque itself. That’s why they mostly stand empty seven days a week. They are an unintended symbol of the very limited appeal of cycling in Waltham Forest, where cycling's modal share is stuck on one per cent.

As I once cruelly observed, Waltham Forest, among with other barbarian regions of London, was once identified by Tom Bogdanovicz as “out there” - places where the complacent and insular LCC leadership evidently never ventures.

Bogdanovicz is of course basically right that cycle parking across London is lamentably inadequate. But that reflects on the dismal failure of the LCC as a campaigning organisation. Cycle stands are cheap and don’t upset drivers, yet after 30 years the LCC has shown itself to be an insignificant organisation wholly lacking in influence. In the same breath the LCC puffs out its chest and asserts that it has the power to determine the next government.

I shall have more to say on this delusional vanity next week, and also why cycling in Britain faces a very bleak future.
Posted by freewheeler at 12:59