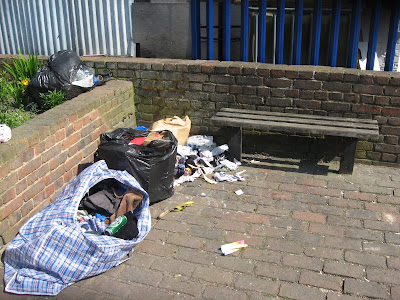 At severe risk to my health I was out on my bicycle today under a deceptively sunny blue cloudless sky which as we know is full of vicious Icelandic particles (FOREIGN DEATH CLOUD SWEEPS BRITAIN was the headline in yesterday’s Express, or something like it). I could hardly sleep last night, with the eerie silence and the strange absence of a jumbo screaming into Heathrow at 4 am, thanks to that nice Mr Brown increasing the number of night flights over London. (That’s another topic which that nice Mr Cameron and that nice Mr Clegg will have absolutely no comment on.)

Anyway, I came across this glorious testament to four years of the ‘war on enviro-crime’ fought by our glorious Liberal Democrat-Labour coalition council (and since ‘war on enviro-crime pics feature both Clyde Loakes and Bob Belam it’s no use the two parties blaming each other). Belgrave Road E17.

Seating for pedestrians is more or less non-existent across the London Borough of Waltham Forest, as you would expect from a car-centric Council which despises walking and cycling, but here is a rare exception. Isn’t it lovely? And it made me think: if volcanic ash was to shower down across the borough, would it (i) make things look worse (ii) make things look better (iii) make no difference at all to crap Waltham Forest. Please write down your answer and keep it until May 6th, after which you can chuck it away, as your opinions will then become worthless and all those people stuffing leaflets through your door or soliciting your vote will vanish, never to be seen again until 2014.
Posted by freewheeler at 18:47