A cycle stand and the local elections 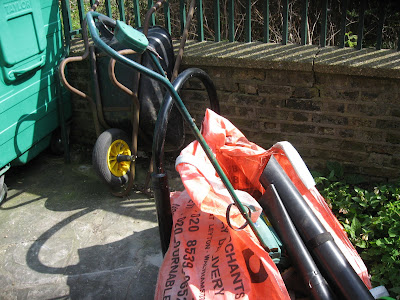 After sarcastically pointing out the council’s failure to install cycle stands at numerous buildings which it is responsible for and which are used by the public, I can report that a single cycle stand has finally been put up at the Vestry House Museum, Walthamstow.

That’s right, one poxy stand, for a building which attracts twenty or more cyclists when it hosts nutritious environmental events like apple day. And note how the museum’s staff are treating this brand new stand, which has been thoughtfully sited beside a waste container. Yes, it makes a useful support for gardening materials.

An election leaflet from the Liberal Democrats, which touchingly explains how the Lib Dems are demanding two or three one hour parking bays to ‘allow more people to enjoy this hidden gem’.

Which tells you all you need to know about the car supremacist prejudices of the local Lib Dems and their cosmic indifference to cycling and walking.
Posted by freewheeler at 10:17