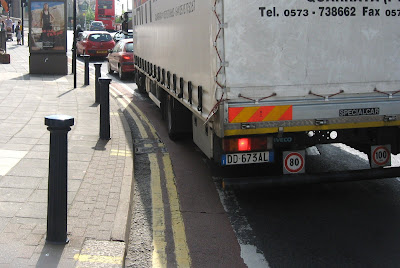 Why are fewer and fewer London schoolchildren cycling to school?

It can’t be because the roads are perceived as dangerous because as we know London is 2.9 times as safe to cycle in as it used to be (it’s a Scientific Fact Proved by Experts). What’s more London is full of fabulous cycle-friendly infrastructure, like the cycle lane shown above on the A112 in Walthamstow. Not only is the cycle lane clearly marked out and the lane generously wide, it is also protected by a continuous and well-maintained white line which forbids motor vehicles to intrude.

The answer, surely, is that ancient skills of cycle-training have been lost in the modern world. David Hembrow nostalgically recalls the old days:

The photos show my sister (and a friend) having school cycle training in New Zealand in the 1970s. The training took place in a tennis court, not the road, and included such useful activities as cycling on a narrow plank.

It's a fair test of skill, but I'm not sure it translates usefully to an ability to survive on roads which don't take cyclists' needs into account.

On the contrary, if London’s schoolchildren were trained to cycle on a plank they would be properly equipped to undertake slow-moving heavy goods vehicles on lanes such as the one shown above.

A steady nerve and the ability to cycle along a very narrow surface are key skills required for cycling in London today. Britain neglects cycle plank training at its peril, and there can be little doubt that this is why cycling among schoolchildren has slumped in modern London.
Posted by freewheeler at 11:12