Bicycle hire is horrid and will also cause traffic congestion

A man has asked the High Court to prevent one of the planned "docking stations" for London's bicycle rental scheme from being sited near his home.

Mr Carroll and other residents are concerned about additional noise and traffic congestion which they claim it will create.

And his representative in court, Sasha Blackmore, claimed council planners had failed to consider whether an environmental-impact assessment was needed.

"Our beautiful conservation area must not be defaced by this horrible lump of metal," Mr Carroll said.

"It would bring down this very beautiful place. It would not be a very pretty sight."

Meanwhile official Transport for London figures show that the bike hire scheme has won the support of London’s zombie population and is likely to lead to a 300 per cent increase in zombie cycling, exceeding even the Mayor’s target. 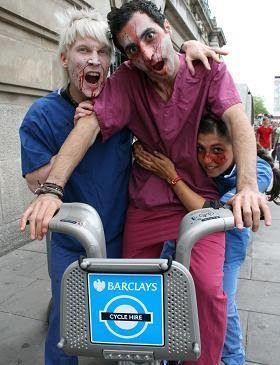 Posted by freewheeler at 13:46