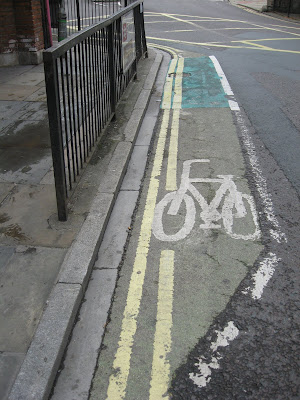 Here’s some classically bad cycling infrastructure in central York, a place which purports to be the second best city for cycling in Britain, and which the Cyclists’ Touring Club asserts is the safest place in Britain to cycle.

I refer to this pathetic scrap of cycle lane on Gillygate, some six or seven metres long, which then vanishes as it meets the junction with Bootham, then starts again, running in a crescent moon line as it joins St Leonard's Place, until it terminates at a pedestrian crossing and then a taxi rank, after which it starts again.

This first section (with badly maintained, substandard markings) actually increases danger for cyclists by encouraging novices to stay close to the kerb alongside a potentially lethal section of railings. Far from being in this narrow green lane, a cyclist coming out of Gillygate should occupy the centre of the carriageway to prevent any driver overtaking her on this sharp bend. 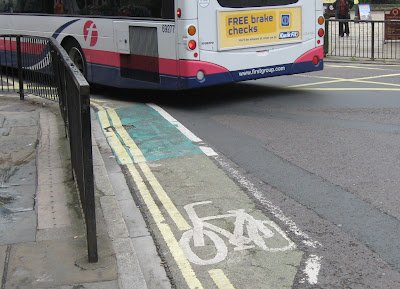 Looking back towards Bootham, with Gillygate on the right (below). See how the cycle lane takes an impossibly sharp turn. If you do get knocked off your bike here by an inattentive left-turning lorry driver, there’s a sign attached to the death trap railings which states that the Accident and Emergency department of York Hospital is just up the road. Now that is helpful. 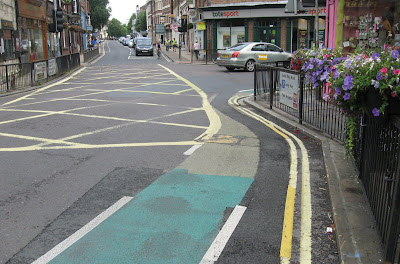 This lane has all the characteristics of vehicular cycling infrastructure. It brings no benefits to cyclists, it’s fragmented, it stops for vehicle parking bays, it confers a false sense of protection, and drivers are free to intrude into it if they wish to while simultaneously regarding the lane as the place where cyclists ought to cycle. 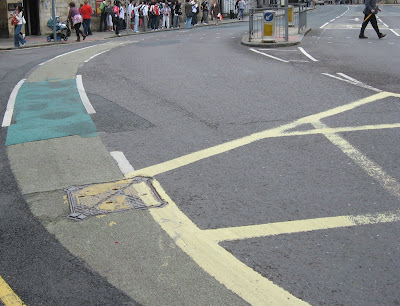 (Below) The lane vanishes at a pedestrian crossing and bays for taxis. That black cab has just left the bay. 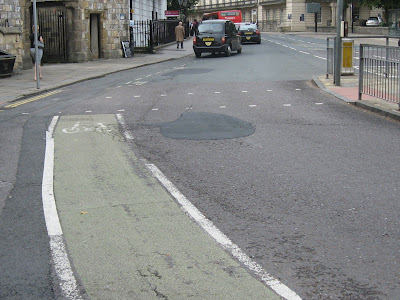 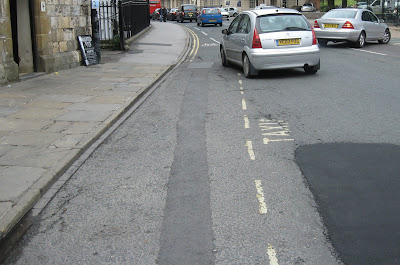 Oh yes, and one other thing.

A clear message about York's cycling status has been fixed to signs on approach roads to the city.

Cycling City York branding, complete with the message 'Respect On Our Roads', has been added to the city's 'Welcome to York' signs.

I caught up with that taxi at the junction with Museum Street. As you can see, the driver is displaying the typical cab driver's respect for cycling infrastructure. 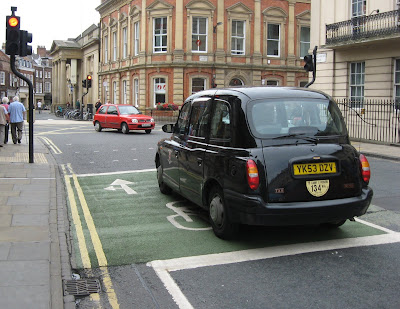 Posted by freewheeler at 08:00