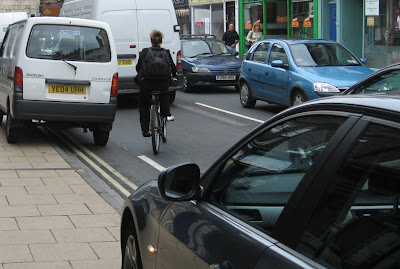 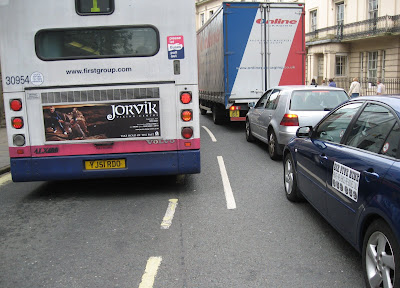 I’ve been away in York.

I think I need to move to there and start a blog challenging the cycling propaganda put out by the complacent and untruthful council. Crap like this, for example:

York is regarded as one of the country's premier cycling cities. It has an extensive network of off-road cycle paths and on-road cycle lanes for cyclists of all ages and abilities to enjoy.

Ample cycle parking is provided throughout the city, including several sites within the pedestrianised city centre.

York has recently been awarded Cycling City status. £3.68m of government money will now help to fund further improvements to cycling facilities in the city and get more people cycling.

York’s cycling infrastructure is risible. It’s so bad that someone from the London Borough of Waltham Forest can feel quite at home there. The two photos above show the cycle lanes on Gillygate and St Leonard's Place (A19).

In the first place it’s blatantly untrue that ‘ample cycle parking is provided throughout the city’. Cycle parking provision in York is grossly inadequate. Everywhere you go there are bikes locked to street furniture and railings because the crap council fails to supply enough bike stands.

Some of the ones it does supply have been installed by clueless morons, who obviously haven’t heard that cyclists need a minimum of half a metre space at each side of a Sheffield stand.

The infrastructure is neglected and fading and perfectly symbolises the council’s indifference to maintenance.

The vehicular cycling infrastructure is both atrociously designed and regarded with contempt by local drivers. Road traffic law enforcement is practically non-existent in York and there are spectacular amounts of pavement parking and ASL incursion.

York is also deeply hostile to pedestrians, with a pedestrian zone riddled with motor vehicles, poor dropped kerb provision, sometimes no crossings on major walking routes, and where signalled crossings do exist pedestrians are made to wait an eternity to cross, and often herded into cattle pens. Signalled crossings are frequently of the kind which allow pedestrians to cross one lane at green, then maroon them in a cattle pen at red where they have to wait two minutes to cross one more lane. York's contempt for pedestrians in this regard is spectacular.

No one at York council has a clue about cycling and walking, and this very compact city is rotten to the core with car-centric design and infrastructure. York claims a modal share for cycling of 19 per cent, though I am deeply sceptical of the accuracy of this figure, and with all modal share statistics there are always very large questions regarding the area which is being measured and the methodology. Cycling in York resembles cycling in London, in that most cyclists are riding alone, and tend to be in the age range 20-45. I saw very few elderly cyclists, I didn't see child cyclists, and I didn't see family groups. In short, the cycling that you see is quite unlike the scenes you'll see in those Danish and Dutch cities where cyclists are visibly relaxed. There are a lot of riders wearing cycle helmets in York.

Here are some extracts from York Cycle Campaign’s manifesto:

Cyclists need more than just cycle facilities or cycle routes. These can be valuable, but they are not enough. Cyclists need the whole road environment to be suitable for them. Few cycle-specific facilities will be attractive to all cyclists - cyclists must always have the right to use the road if they wish

In this document we describe some of the ways in which the ordinary road network can be made more cycle-friendly without providing specific cycle facilities.

The City of York Council's laudable "road-user hierarchy" has cyclists near the top and private motorists at the bottom, so that cyclists' needs should be considered before those of private motorists.

This is not technically difficult, and need not necessarily require extra money.

Yeah, right. Cheap is how I feel.

Anyone who thinks that private motorists are at the bottom of the road-user hierarchy in York is delusional.

Look at the conditions for cycling over the three main bridges in central York. Only a vehicular cycling ideologue could regard them as acceptable.

Here’s a modest suggestion: close Lendal Bridge to all motor traffic. That’s just for starters. Stop thinking that York is some kind of walking and cycling paradise and start to re-imagine the city. Bring over some Dutch consultants.

I took photos. Lots of them. There will be more to come later…

(Below) Bikes locked to street furniture on Micklegate and North Street. 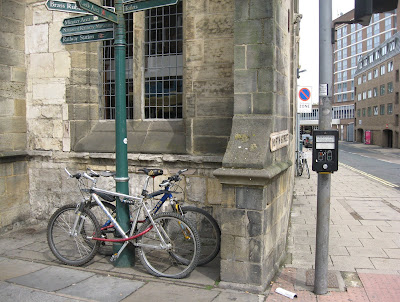 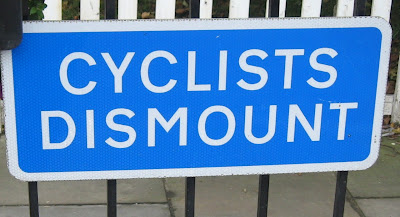 According to the CTC, York is the safest city in Britain for cycling. Yeah, right... All photos taken in York yesterday. 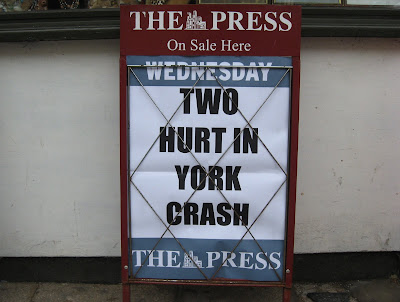 Posted by freewheeler at 07:48