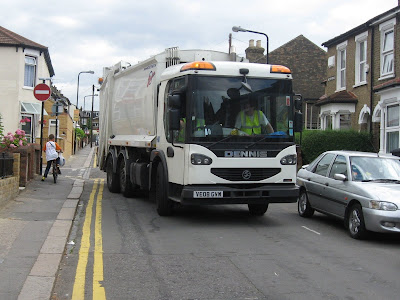 Yesterday I really wished I’d been wearing a helmet cam. It was one of those classic instances which every cyclist knows well. You are cycling along a street and have the right of way when a vehicle suddenly appears at a side junction and pulls out in front of you, forcing you to brake.

Except that this time I wasn’t the victim but the witness. I was cycling east on Milton Road E17. Some 15 metres ahead of me was a boy on his bicycle. As he approached the junction with Tower Hamlets Road, a Waltham Forest council refuse lorry appeared. The driver then pulled right out in front of the child cyclist, even though the cyclist had absolute right of way. The child was forced off the road and on to the pavement (above). By this time I’d whipped out my camera and started taking photographs.

As the driver passed me (below) you can see the child nervously looking to his left to make sure there are no other motorized bullies as he cycles back into the road.

(Don’t be misled by that NO ENTRY sign, by the way – it is telling road users not to turn left into Tower Hamlets Road, which has been made one-way and does not refer to Milton Road, which is two-way at this location.)

If you look at the enlargement of the driver’s cab when the lorry passes me, you can see the driver, who is wearing a green T-shirt, appears to be steering with his left hand while resting his right arm on his seat.

A detailed complaint has gone off to the council. I would urge any other local cyclist who experiences or witnesses bad driving from someone driving a council vehicle to lodge a complaint. 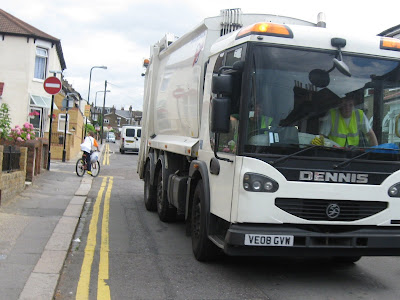 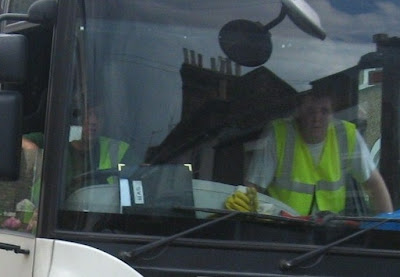 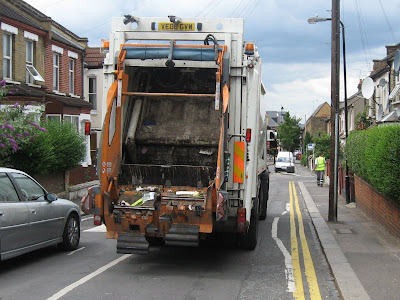