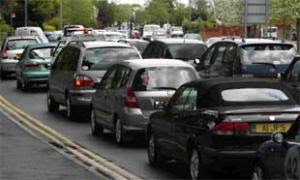 Winchester green campaigners have slated the city’s new transport plan as too weak and a recipe for a “deterioration of residential quality of life.”

Mr Gillham, a veteran FoE campaigner involved in Winchester transport issues for more than 30 years, said it did not address the challenges of climate change or sustainability and was too car-friendly.

“At the heart of the document is a fundamental blindness. The failure of imagination and the failure of will in Winchester is staggering.”

Mr Gillham was unhappy that the plan accepts that the car will carry on dominating people’s travel. He said there were towns in Europe of 150,000 people, four times the size of Winchester, where more journeys are made by bike than car and many places of 25,000 people that are almost car-free.

But car-sick Winchester is no different to car-sick York, car-sick Waltham Forest, car-sick London, or car-sick Britain. Britain is a coarse, reactionary society under the thumb of three political parties which all believe in pandering to petrolheads, with the worst transport planners in Europe, with a car supremacist Department for Transport which despises walking and cycling.

Everybody is in denial, including Britain’s two main cycling organisations who think that somehow things are going to get better.
Posted by freewheeler at 09:34