"Quite often we stop people who aren't cycling on the road because they don't feel safe.

So, create safe and convenient conditions for cycling, like the Dutch and Danish do? Er, no. ‘Educate’ naughty cyclists to obey the rules of a car-centric world.

Bristol, of course, is a city where spectacular obstruction of the pavement and of cycle lanes takes place every day on an epidemic scale to the virtual indifference of the local council and cops.

Local cycling representatives pile in to support this new Bristol scheme. Instead of explaining that perceived bad behaviour by cyclists is a response to car-centric streets and instead of demanding segregated Dutch-style cycling infrastructure which would make cycling safe, convenient and fast, we get stuff like this.

Martin McDonnell, chairman for the Bristol Cycle Campaign, said: "We welcome these plans because we do not condone anti-social or law-breaking cycling behaviour.

Not that he’s alone:

Allan Williams, Sustrans' policy advisor, said: "It's a mistake to look at people as either drivers, pedestrians or cyclists. Many of us are all three and as the number of people cycling in Bristol increases, creating space that all road users can share is vital.

No it isn’t a mistake. Creating space that only cyclists can use is vital. Everything else is hogwash, drivel and the kind of fatuous car-centric irrelevance that self-styled representatives of cycling embrace with the usual muddle-headed enthusiasm. 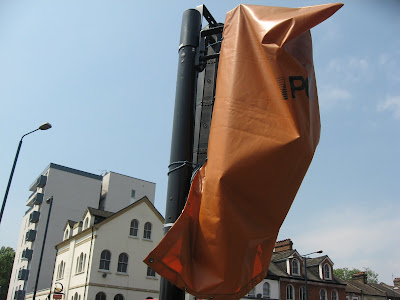 Posted by freewheeler at 13:44