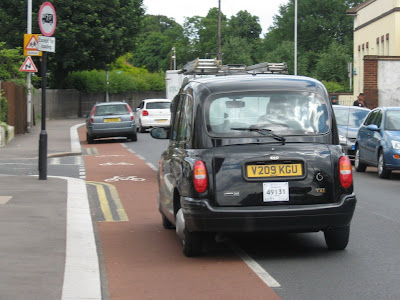 The Daily Mail whips up some froth about a famous cyclist:

Despite being a vocal campaigner for cycle safety, the 62-year-old flouts the rules with astonishing regularity.

For good measure the Mail throws in a juicy morsel about Jon Snow’s private life, to underline the extent to which this pedalling pest is Not One Of Us.

Snow for his part has denied any wrongdoing.

In the Netherlands, which already has the best cycling infrastructure in the world, the government is spending 30 euros per person per year, every year.

In the UK the government in 2008 gave Cycling England the equivalent of 77 pence per person per year for just three years.

Whereas the Dutch spend their money on serious infrastructure which attracts mass cycling, the UK’s paltry cycling budget is blown on painted lines in the road, badly designed cycle paths which quickly become unattractive through poor maintenance and expensive advertising and celebrity endorsement. Check out the fiscal facts here. Cycling is continuing to flatline in the UK, though hardly anyone cares to acknowledge this dismal reality.

As for Seaton’s fabulous Advanced Stop Lines. Does this guy cycle around with his eyes closed? Every ASL in London is repeatedly abused by motorists on a phenomenal scale. The proposal to transfer enforcement from the car-supremacist cops to local councils seems to have been kicked into the long grass – but then we wouldn’t want to upset drivers by actually enforcing laws designed to protect what little vehicular cycling infrastructure there is, would we? Seaton doesn’t even have to stray outside the Guardian’s own website to discover the ASL reality.

As for those ‘new bike lanes’. My photographs illustrate the lovely resurfaced and widened cycle lanes on the B159 in Leyton. Since you can quite legally park in any section of the lane except at junctions this does not make for safe or convenient cycling. Cyclists who disobey the rules are simply adapting to a car-centric transport infrastructure which has no interest in their safety or convenience. As far as I'm concerned, that's fine as long as you don't impinge on the safety and convenience of pedestrians. (It's interesting to see that Jon Snow wears a cycle helmet, which is a symptom of someone anxious about their safety.)

Instead of demanding that cyclists obey the rules of a car-centric world, Britain needs to start building the kind of safe, convenient, segregated Dutch-style infrastructure where rule-breaking isn't remotely tempting because cyclists are valued and treated as equals, or even as more important than drivers. 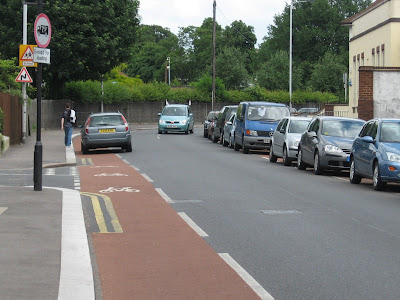 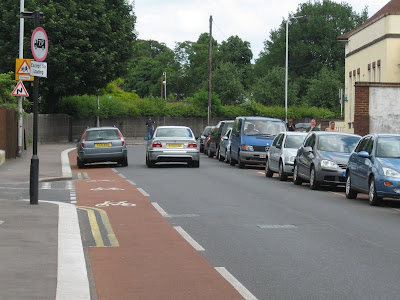 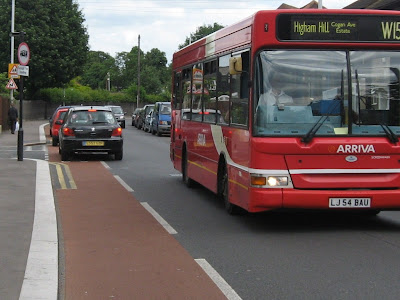 Posted by freewheeler at 11:07