cycling in London: it's going nowhere 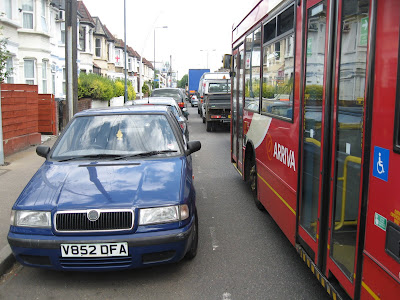 Spot this outer London cycle lane. It's between the bus and the blue car. The A106, Leyton. Free parking bays for cars have primacy over the safe, segregated cycle path which could be built here on this important commuter route if the political will was there.

The Council for the Preservation of Rural England:

“The target to increase cycling in London from two to five per cent of all trips by 2026 is as lacking in ambition as it is flawed.

“Transport for London assumes that it is not feasible to cycle for journeys of more than five miles. Yet its own surveys of busy routes show that average cycle commuter journeys are already seven miles long today. London’s strategy was designed by pen pushers rather than pedal pushers.”

It says much more effort is needed to increase cycling in outer London, where cycling levels are much lower than they were in 1990, but no funding has been identified to do this. Instead the Mayor’s Transport Strategy has suggested removing strict planning presumptions against road and car parking expansion.

The CPRE is quite correct in its diagnosis of the Mayor’s vacuous cycling strategy and it ought to be asked why the London Cycling Campaign is incapable of such analysis.

However, the CPRE appears peculiarly ignorant of the solution. Germany is not exactly the leading cycling-friendly country in Europe and modal share in Munich, 8 per cent, is nothing to celebrate. As usual, there’s a spectacular ignorance of modal share in the Netherlands, and why even there some towns and cities have much higher rates than others. Why mention Amsterdam and not Groningen, where fabulous cycling infrastructure is connected to an economically vibrant town centre?

It always comes back to the infrastructure:

The London Cycling Campaign agrees with Ralph Smyth’s conclusions. The LCC’s Mike Cavenett said, “Our motto is one in five by 2025, so we’re aiming for a 20% shift, which makes the Mayor’s 3-5% look very unambitious. When you look at air pollution, public health and emission levels in London it’s clear we need to take decisive action. It’s a shame that ambitious and visionary talk seems to fade away when it comes to implementation.

“It’s a cultural thing as much as anything else – cycling is just not engrained in the London development psyche. I think changing that takes years of patiently chipping away at people’s attitudes and that’s exactly what we’re here to do.”

That’s right. After thirty years of failure, the LCC will continue to fail cyclists by pursuing a delusional strategy of opinion-shaping. The LCC has no interest in introspection and its current target of a 20% shift is every bit as fatuous and futile as the target of 10 per cent modal share by 2012, which it enthusiastically embraced at the end of the twentieth century.

The pitifully small rise in London's modal share that there has been, as Bob Davis argues, would have probably happened without anyone doing anything. Indeed, with its constant mantra of a better world but not today, the LCC serves to suppress the demand for good cycling infrastructure right here, right now. Amnesia is an essential requirement of LCC campaigning.

Meanwhile, out in the real world

Motorists in London are being asked how much they should pay for parking fines.

People will also be questioned about what levels of fines should be imposed for entering bus lanes and box junctions, and how much it should cost to be released from wheel clamps.

It is part of a three-month consultation by London Councils and Transport for London (TfL).

It's a truly incredible example of how seriously the lawless motorist is regarded by London's car-centric transport establishment and car supremacist local authorities.

The last time London Councils did a consultation on parking enforcement every road user group bothered to respond except the London Cycling Campaign and Living Streets, which is an organisation supposed to represent pedestrians but which is every bit as toothless and ineffectual as the LCC.

More and more individual cyclists (but not cycling groups and organisations) are asking for safe, segregated cycling infrastructure. Andreas raised this with TfL and got back this very interesting reply:

TfL said the routes are simply not being used frequently enough to warrant separation of traffic. It is only during peak hours that you will see many cyclists in the lanes. TfL claim that segregating the lanes would create many problems for loading vehicles. They also claim that cyclists don’t want to be treated differently to other vehicles.

That last sentence is of course true. Vehicular cyclists dominate Britain’s cycling organisations at both a national and local level, and their pernicious influence even extends to the Green Party.

However, as one commenter shrewdly noted:

There appears to be some circular logic going on here

“…segregation however, is not something that is being considered for the cycle superhighways. TfL said the routes are simply not being used frequently enough to warrant separation of traffic.”

Could it be that less confident cyclists won’t start cycling until there is segregation, but until they do in numbers they won’t segregate?

Exactly. Look at my photograph. For TfL to argue that segregated structure will only be granted when the demand for it is there is utterly absurd, because you are never going to get mass cycling on narrow, vehicle-crowded cycle lanes like this. There's a clear choice at this location: car parking or cycling infrastructure, and the London Borough of Waltham Forest is quite clear that car parking bays must always be number one. In this they are no different to any other London council.

Boris Johnson, Transport for London, London Councils, the CTC, the LCC and the Green Party are all committed to the failure of mass cycling in Britain. Mass cycling will never be achieved by pursuing the demonstrably failed policy of vehicular cycling. Greater London does not have one single street where road space has been allocated for safe, segregated cycling over the primacy of the car. Millions of pounds will continue to be frittered away on blue paint, SkyRide, advertising, celebrity gimmicks and spin. Not a penny will be spent on reallocating road space from the car to the cyclist, because neither the Conservative government nor the Mayor of London, nor any London local authority has the slightest interest in disturbing the primacy of the driver. Here in Waltham Forest the council is getting £250,000 from the Olympics to spend on cycling - money which is going to be spent on painting a narrow cycle lane on the A114, a road which very few cyclists use and which no one will be enticed onto by a crap cycle lane. There will be two junctions 'improvements' one which involves the classic farce of an off-road cycle path which is 'shared use' with pedestrians and where cyclists will have to give way twice for cars on a cycle path around 100 metres in length. It's yet more of the kind of grossly inadequate infrastructure which will do nothing at all to encourage mass cycling.

"A lot of people might be nervous about cycling, but TfL is funding cycle training in all the boroughs. When you've got more cycles on the road, cyclists are more confident, because it's strength in numbers."

And now here is a short film which shows how safe cycling in London with lots of other cyclists is.
Posted by freewheeler at 09:00