Is cycling flatlining in York? 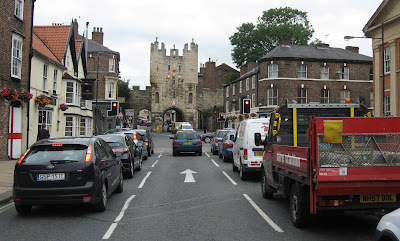 What are the facts regarding York, sometimes described as "Britain's Number One Cycling City"?

According to the London Cycling Campaign,

Crikey! One in five of all trips in York are made by bicycle. It certainly doesn’t seem like that when you travel around York.

However, York also appears in a list of the world’s most bicycle-friendly cities, with an impressive modal share:

Perplexingly, however, another site says that

Percentage of trips to work by bike at the last Census included: York 18%.

Hang on a bit! Modal share doesn’t mean commuter cycling, which is always the top cycling mode. It means ALL cycling, throughout the day.

Strange. A York website also asserts that York is

One of the premier cycling cities in the country - with 19% of the population cycling to work, compared to a national average of 3%

However, even if the 19 per cent figure only applies to commuter cycling, this is less than impressive since the figure was higher two decades ago:

The same could be said for the overall modal share, assuming that the figure is accurate:

So, at best, cycling’s modal share in York has risen one per cent in 12 years. Which, allowing for a margin of error, is deeply unimpressive, bearing in mind the resources poured into promoting York as a "European City for Cycling" and "Britain's Number One Cycling City"

But even if the modal share figures are accurate

The rate of cycling in York remains lower than that anywhere in the Netherlands.

If York is a place where one in five journeys are by bicycle, where are all the cyclists? If the modal share figure is true, then York is only just behind Copenhagen - except that it plainly isn’t and has nowhere near the same cycling density as the Danish city.

My photograph above shows Blossom Street (A1036) at the junction with the city walls, looking towards Micklegate. This is a major route into the city centre from the south and my photograph was taken on a weekday morning. I saw just two cyclists using this car-choked junction, which is hardly surprising in view of the cycling-hostile road environment. There isn’t even a cycle lane on these three lanes devoted to motor vehicles.

There are always very big questions about cycling statistics and how they are arrived at. Camden Council, for example, calculates modal share from three sources:

This is plainly more reliable and comprehensive than simply relying on the census or a survey. What people say about themselves in a questionnaire may not be very accurate.

Cycling does not appear to be a very attractive option for most people in York.

Interestingly, when Sustrans produced a report

Among participants in the York pilot, 20% of all trips moved from car to other forms of transport. There was no increase in the modal share for bikes.

People who switched from the car, did not switch to cycling.

Traffic growth in York was 0.8% over the period 1999-2003, reflecting both national and local encouragement of car dependency. The council currently anticipates a dramatic increase in traffic in the city, and as the local FoE group noted, all of the options will put more traffic on our roads over the next 10 years.

The extent of car dependency in York is underlined by the council’s recent Traffic Congestion Survey,

The largest proportion of respondents (39 per cent) chose scenario C

Expecting vehicular cycling to flourish on roads where even more motor traffic is anticipated is, to put it mildly, unrealistic.

Overall, the greatest proportion of respondents said the majority of their journey to work is made by car. Dropping children off on the way to work is overwhelming the most likely reason for respondents saying they travel by car for school/nursery journeys.

Those over 55 years of age were statistically more likely to travel by Park & Ride for journeys around York than younger residents.

The extent of car dependency in the city is underlined by these figures for the University of York:

34.5% of staff live within 2 miles of the University but over half travel by car more frequently than they walk. A further 24.6% live less than 5 miles away.

Only 12.9% of staff live more than 20 miles from the University

30% of car users stated that there were no initiatives that would lead them to change their travel behaviour.

Britain now has generations who have grown up in families where car travel is the natural way to get around towns and cities, in a national context where walking has declined steeply, and cycling has stagnated.

Yet York is the perfect place to Groningenise.

However it is plain that both York traffic planners and councillors completely lack the kind of vision required to turn York into an attractive city for walking and cycling. The current pedestrian zone is a farce, with cycling banned and no cycling through-route, while at the same time many so-called pedestrianised streets are penetrated by vehicles which are either exempt (blue badges) or unlawfully present and not subject to enforcement. Dutch-style infrastructure, which would turn York into a genuine mass cycling city, is not remotely on the cards.

I have never understood why transport planning has to be made ‘democratic’, since no other form of city management is. Like the very centre of London, York is infested by taxis and has a vocal taxi driver lobby, who complain about things like the high flow of pedestrians across the two pedestrian crossings at the station. The projected ‘improvements’ to York station will doubtless include the abolition of the zebra crossings and their replacement by signal lights, in order to further discriminate against those who walk into the nearby city centre at the expense of those who choose the fossil-fuel option.

“A cross-party consensus has been reached that we will not recommend charging at the moment,” said the congestion committee’s chairman Councillor Dave Merrett.

How is the council proposing to tackle congestion and persuade people out of their cars? Not by encouraging them to cycle by introducing safe, convenient Dutch-style cycling infrastructure but instead

improving local bus services has to be top priority in terms of the ability to get people about by different means.

But there is nothing attractive or sustainable about getting around York by bus. From the point of view of fuel consumption and emissions, it's almost certainly better to drive than to take a bus. For the entire UK, average occupancy is about 9 people per bus. This is skewed upward by places like central London and Manchester where the occupancy levels are quite a lot higher. Then you have the way that buses take you from somewhere near A to somewhere near B via C, D and E, so the distance is always greater than you'd take by private transport. And of course add to this the way that buses reduce cycling and walking due to not being very pleasant to "share the road" with.

York is a car sick city, with an exaggerated and false reputation for being walking and cycling friendly. Its population is in the grip of extreme car dependency and the city council has no coherent transport plan for the future. Cycling appears to be stagnating and the future for cycling in York is bleak, since all the council offers local cyclists is some minor amelioration of vehicular cycling against a background of ever-growing volumes of motor traffic.

Or in the words of York’s very own cycling man of wisdom:

City of York Councillor Joe Watt commented that: “I think one of the lessons for cyclists is that they have to cycle defensively and be visible. Wearing a helmet can also make the difference.”

(Below) Sharing the road with buses on Queen Street, York. 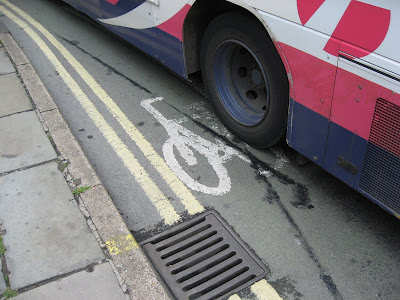 Posted by freewheeler at 10:44