Why London is unfit for cycling 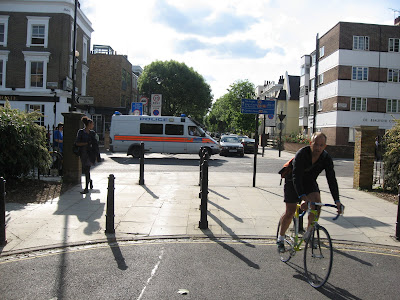 Witnesses at the Northgate pub nearby [the building in the top left corner of the above photo] said the police car was travelling so fast it continued along the road for at least 100 metres after hitting the cyclist at the junction of Southgate Road and Northchurch Road.

Lisa Hutchings, a charity shop worker from Islington, said: “The sound of the police car hitting the bike was so loud I thought it was two cars crashing. I looked up and there was a body flying through the air.

Surprise, surprise, the Metropolitan police are dragging their heels about investigating a cop who has killed an innocent Londonder.

The MacLeods' lawyer said the family, of Stoke Newington, were “disappointed” about the way the police had handled the inquiry.

But leaving aside all the problems associated with the police investigating themselves and the issue of high speed police drivers who regularly kill other road users (usually pedestrians), the primary problem at this site is infrastructure:

Locals said that cars rarely give right of way to cyclists and angry exchanges were commonplace.

James Leong, who lives in Southgate Road, said: “There are a dozen near misses every night. You sit in the pub garden during rush hour and [hear] cyclists shouting at cars and cars tooting.”

He added: “They’ve created a cycle route but this crossing is deadly for cyclists.”

This is indeed a deadly crossing for cyclists. It is on a major cycling route and has, by London standards, a high level of cycling flow. Cyclists pass by all the time. The two photos below show the crossing from Northchurch Road, facing west across the junction with the B102, Southgate Road N1. 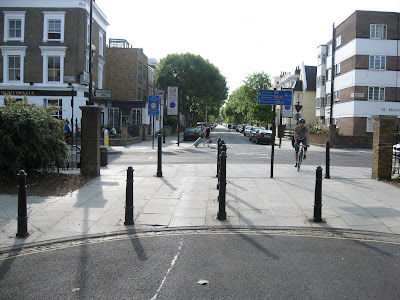 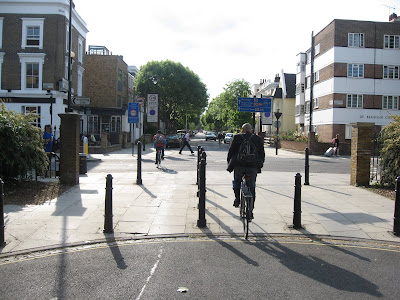 As you can see, even from this perspective the design is atrocious. There are no clearly defined cycle paths to deter conflict with pedestrians, or for that matter cyclists going in opposite directions. It's just a chaos of bollards. The highway engineer who designed this crap should be sacked. 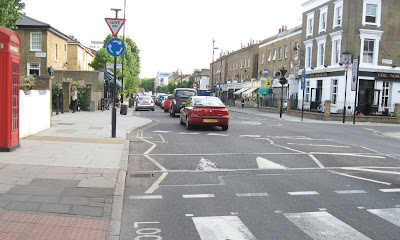 Only local drivers are likely to anticipate a cyclist whizzing out across the pavement on to the roundabout, even though the cyclist is acting quite lawfully and will, if they reach the roundabout first, have priority. In fact mini roundabouts on straight roads like this are lethal because drivers always regard themselves as having priority over drivers or cyclists approaching from a side road, even though they don't.

Both Hackney council and Islington council know there’s a problem but neither is very interested in addressing it. No surprise there. There is not a single street in the whole of Greater London where cyclists have priority over motorists, and every London borough is hostile to both walking and cycling, with transport policies dictated by able-bodied male car-driving highway engineers whose fossil-fuel addiction is heavily subsidised by non-car drivers.

Local cyclists know all about the problems at this site.

A PROMINENT cycling group has criticised the council for failing to act over a dangerous mini-roundabout where a cyclist was knocked off his bicycle by a police car last week, writes Charlotte Chambers.

The Islington Cycling Action Group told the Tribune they had presented the Town Hall with a dossier of danger about the junction of Southgate Road and Northchurch Road a year ago.
John Ackers, the ICAG secretary, said:

“I had given the council six to eight emails from Hackney cyclists pointing out this junction is really dangerous. They said they were going to initiate a safety review.”

However, one year on, he said he has heard nothing from the council.

What is needed at this lethal junction? First of all, get rid of the lethal mini roundabout. Secondly, block off Northchurch Road to motor traffic on the west side of Southgate Road. Thirdly, introduce lights that give cyclists equal priority with motor traffic. Fourthly, design a proper cycle crossing instead of a few crap bollards. It’s really quite easy. To get to this blissful state will require more than writing a letter to London Cyclist. It will mean a couple of hundred cyclists turning up to bring all traffic to a complete stop for a protest. Invite the media. Give them press releases stating that you are sick of seeing cyclists killed as a result of poor infrastructure, and spelling out you want to go Dutch, with proper infrastructure.

(Below) See if you can spot the cyclist. 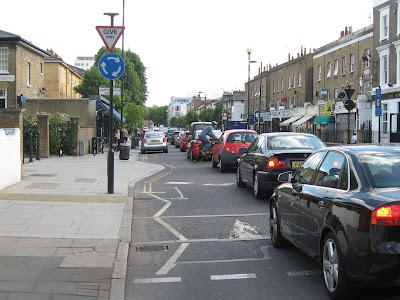 (Below) Looking east, with the pub to the right. Posted by freewheeler at 07:42