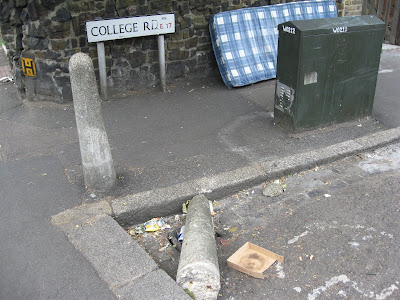 A footnote to the curious case of the Land Rover Discovery driver of College Road E17.

Yesterday I cycled along College Road and took these pics. Note the condition of a street where the council allows free and unlimited parking. Waltham Forest is a car-sick borough, hostile to walking and cycling, with growing levels of squalor and violent crime (The murder on Monday followed two street stabbings and reports of gunfire near a children’s playground.), with one of the unhealthiest populations in London. Even the air is toxic, which is why so many of our young people are keen to cover up their faces (The masks these lads have over the noses are not such a bad idea). Luckily the Council is pursuing ‘regeneration’ through the strategy of actively encouraging car dependency and promoting an ever more car-centric local street infrastructure.

Note the curious road markings (below). And note in the far distance a cyclist. That’s amazing. I’ve never caught a cyclist on camera on College Road before. Someone should tell TfL. They can then announce that there has been a 100 per cent increase in cycling in Waltham Forest, exceeding the mayor’s target for outer London cycling by a stunning 30 per cent. 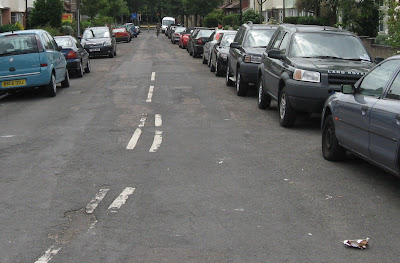 At the end of the road there’s a turning circle for drivers. Some idiot had parked a large white bus across it and sloped off somewhere. What sort of employer has crap, inconsiderate drivers like this? Doh! Might have guessed! 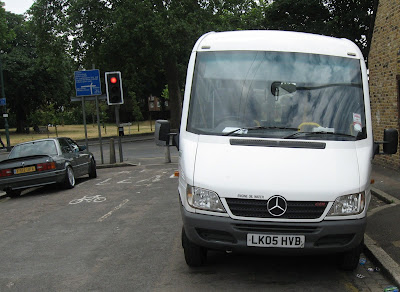 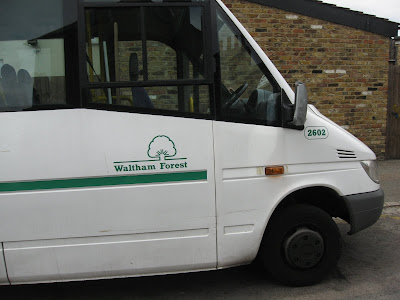 If you are interested in Waltham Forest non-roads violence, a Doctor writes

The Doctor can be found here.
Posted by freewheeler at 08:50