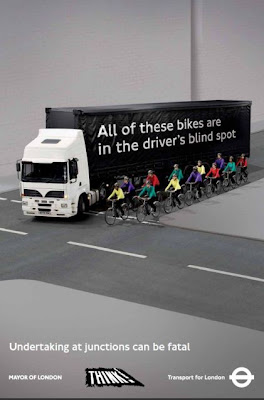 Transport for London is doing its best but are cyclists grateful? No, they are not.

There's a reason why large lorries are the biggest killers of cyclists, and it's not just because cycle lanes lead riders into the wrong place or because some riders ride badly you know? Whatever happened to the appropriation of responsibility and the biggest, most dangerous drivers being responsible for the machinery that they wield around the vulnerable road users around them?

The poster shows it in an impossible position, at that junction an artic would have to move right out into the junction before turning. The driver should be able to do that in a way which puts all the cyclists in the field of view of his mirrors.

The poster also fails because if the lorry has properly fitted mirrors at most 3 of the cyclists may be in a 'blind spot'. All of the cyclists would have had moved through fields of vision or have been there before the lorry arrived. In that situation the driver must know they are there unless he has been on his phone or reading the paper etc. (or failed the eyesight test!)

I just noticed the lorry image is of a M reg lorry, so old it is exempt from the latest mirror rules. It is missing a right side class IV mirror and a class VI mirror.

I am sorry to say that some people even think it is amusing to mock this poster by satirising it with reference to Cycling Superhighways. This is in very poor taste. 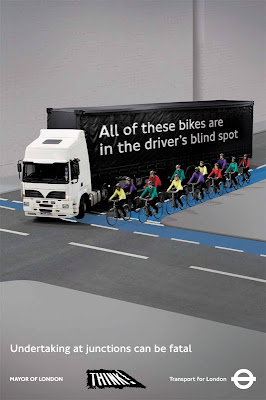