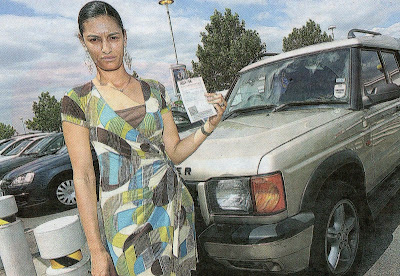 This Walthamstow 4X4 driver believes she has been treated very badly. She is so outraged by the injustice that she contacted the local newspaper, drove back to the scene of her persecution, and posed by her Land Rover Discovery.


A SHOPPER was handed a £45 parking fine after being one minute late back to her car. Precious Davis said the three-hour time limit at Leyton Mills shopping centre could put shoppers off of going there.

Mrs Davis parked her Land Rover Discovery at the centre on May 21 and went to Asda and Fitness First. She was with her husband St. Clair and they arrived at 11.46am.

As they left the gym they saw a parking attendant standing at their car.

"We saw the car and the attendant standing by it but we didn't think anything of it," Mrs Davis said. "Then I saw the ticket. I said 'come on, it's a matter of seconds'."

Mrs Davis, 35, of College Road, Walthamstow, has appealed against the fine but it was not accepted by UK Parking Control Ltd.

She said the fine was "a bit over the top" and she wanted to raise awareness for other shoppers.


Mrs Davis’s sense of outrage I find quite interesting. Not because of her parking ticket story (it’s not a Council parking ticket but private enforcement done on behalf of whichever company owns Temple Mills retail park).

What I find interesting is what her car dependency tells us about the London Borough of Waltham Forest and its car-centric transport infrastructure.

This is a distance which could easily be walked or cycled. Mrs Davis prefers to drive there in her Land Rover Discovery.

The website Stop Urban 4X4s points out the dangers which vehicles like this pose to other road users:

The extra weight of 4x4s automatically makes them more of a danger to other road users when they are involved in a collision. From basic mechanics we know the kinetic energy of a vehicle, which needs to be dissipated in a crash, is proportional to its mass.

However, the unique problem with the off-roader shape is that this extra weight is combined with additional height. Higher bumpers and mismatched crumple zones lead to extra dangers to pedestrians, cyclists, people in smaller cars and the occupants of the big 4x4s themselves.

Indeed, it is argued that in collisions, 4X4s are

more than twice as lethal to pedestrians than normal cars.

There is also the issue of air pollution:

A heavier vehicle needs a bigger engine to achieve the same performance as a lighter car, which will in general produce more pollution per mile (including carbon dioxide, nitrous oxides, unburnt hydrocarbons and particulates).

Diesel models are popular among 4x4 owners because they are less thirsty. However, while diesel engines produce less carbon dioxide, they give out greater amounts of the other pollutants, which can make them even more harmful to the people around them.

Air pollution is a significant issue in the London Borough of Waltham Forest, as is health generally.

The Southern part of the Borough [which includes Mrs Davis’s home and her route to Temple Mills] is subject to higher levels of poor health, which has been associated with deprivation, poverty and overcrowding.

The poor are less likely to own a car and Waltham Forest has areas where the level of non-car owning households is surprisingly high (49 per cent in Hoe Street ward), alongside a growing proportion of households which own three or four cars.

The Council acknowledges that there is

Reliance on the private car as the main mode of transport, contributing to air pollution, greenhouse gas emissions and congestion; It appears that public transport is not being utilised to access employment opportunities and services and facilities.

Studies have shown that some of the poorest air quality levels in Waltham Forest are adjacent the busiest roads in the borough and the whole borough has been declared an Air Quality Management Area.

I don’t know which route Mrs Davis takes when she drives her Land Rover Discovery the distance of less than two miles to Temple Mills, though the two obvious routes would be down Lea Bridge Road to Orient Way, or along High Road Leyton to Ruckholt Road. Either route involves using the strategic road network, and, as the Council recognises

Air pollution from the strategic road network is an issue across the Borough.

We now know that

POLLUTION kills 128 people every year in Waltham Forest, according to a new report.

The study, by the Institute of Occupational Medicine (IOM) and commissioned by London Mayor Boris Johnson, estimates that poor air quality is shortening life expectancy in the borough.

The figures for each ward in Waltham Forest can be found in the Report on estimation of mortality impacts of particulate air pollution in London.

But no one can really blame Mrs Davis for driving her Land Rover Discovery to Temple Mills. Every aspect of the local transport infrastructure encourages her to do so.

For a start, car parking on College Road is unrestricted and free. There are a number of 4X4s and luxury cars parked in this road on a regular basis. College Road happens to form part of a strategic cycle route but there can obviously be no question of displacing parking bays and substituting a cycle path. On the western side of College Road near the junction with Grove Road, the council has installed a dropped kerb for wheelchair users, but it has also deliberately ended the yellow line 'no parking' restriction before the dropped kerb, ensuring that a car may be parked lawfully across the dropped kerb. The needs of people wishing to park a car must come before the convenience of footway users with wheelchairs, prams, buggies or mobility scooters.

It is quicker for Mrs Davis to drive to Temple Mills than to walk or use a bus. Bus travel in Waltham Forest is a slow, cumbersome business. There are relatively few bus lanes and the roads are heavily congested by, well, people using cars. Whether or not it is quicker than cycling depends very much on the time of day and the traffic conditions.

If she cycled to Temple Mills she would find herself waiting up to six minutes to negotiate the signalled cycle crossing at the junction of Orient Way and the Eastway, because the phasing is set not to inconvenience motor traffic.

It is much safer for her to drive. In her large, fortress-like vehicle she is safe from other drivers and if she is involved in a crash, she is protected by air bags and many other safety features. If, instead, she cycled, she would find herself using a narrow cycle lane, mainly 1.5 metres wide, wedged between parking bays and overtaking heavy goods vehicles.

Driving to Temple Mills is also far more pleasant than cycling. There is nothing relaxing or enjoyable about cycling on the roads which Mrs Davis takes in her Land Rover Discovery. Apart from the danger and the high volumes of motor traffic, on the approach to Temple Mills the cycle path is neglected and overgrown and the signing hidden by vegetation or very misleading. There are a few back street routes which could be utilised but all of them involve cycling down roads lined on both sides with parked cars, a situation not conducive to safe or attractive cycling.

When Mrs Davis arrives at Temple Mills she can enjoy up to three hours free parking and park close to her destination (whereas if you are shopping on a bike there are, for example, no cycle stands by B&Q).

Of course there are social costs and consequences of Mrs Davis’s chosen travel mode but the Mayor of London has no interest in making her pay for them, and neither does the current government or the local council.

As far as infrastructure is concerned, both Transport for London and the London Borough of Waltham Forest are working hard to make life as good as it can be for Mrs Davis, by ‘easing traffic flow’. Among other things this involves introducing more and more one-way streets, converting more and more pavements for car parking, and moving cycle lanes to create parking bays.

Who can possibly blame Mrs Davis for preferring to drive a Land Rover Discovery for short distances than cycle in conditions like this? I certainly don’t.

It’s the infrastructure, stupid.
Posted by freewheeler at 10:24