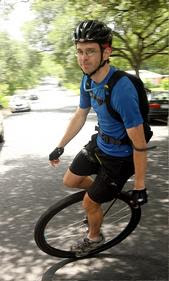 A.J. Greig, 34, was busted in early June for rolling through a red light on South Congress Avenue at Elizabeth Street on his unicycle.

But now criminal cyclists have the chance to be re-educated and to adopt a more conformist approach to a car-centric society.

Ticketed Austin cyclists can pay $25 to take the course and then have their fines waived and the offenses erased from their driving records.

“There's a whole lot more to cycling in traffic than how not to fall over," Robinson said.

I’m not really persuaded that a unicyclist doesn’t already know that.
Posted by freewheeler at 13:45