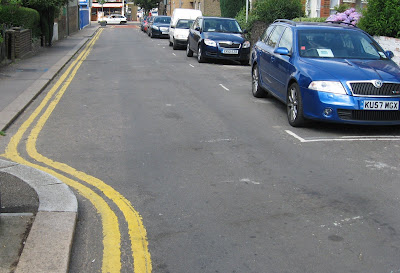 My photograph shows Milton Road E17, looking west, between the junctions of Browns Road and Hoe Street. This section of street is one-way and there’s a NO ENTRY sign just to the left of where this photo is taken.

The Waltham Forest Cycling Campaign believe that there should be a contra-flow lane put in here, since this is a back street route which many cyclists use to avoid the main roads. At present cyclists simply ignore the No Entry sign and pedal on, rather than take a ridiculously long diversion down Browns Road and then all the way back again along the A112.

In reality it would be perfectly feasible to build a segregated cycle path on the Dutch model here. All that stands in its way are those eight parking bays. You have to have a permit to park here, and a resident’s permit costs £30 a year. This works out at a little under 60p a week for the privilege of parking your car in the road.

The council earns in total £4.80p a week from eight cars parked in those bays. This makes no economic sense at all but it’s a classic example of how motoring in London is lavishly subsidised.

The economic benefits of mass cycling are well known. But the London Borough of Waltham Forest has absolutely no intention of putting in safe cycling infrastructure here. It would much rather rent out this road space for £4.80 a week.

This is the reality of what is suppressing cycling infrastructure in London. Car-centric politicians who put air pollution, ill-health and car dependency first.
Posted by freewheeler at 09:20