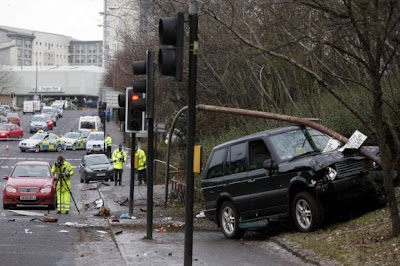 Janet Brown, 40, was walking to work when she saw the incident unfold.

She said: 'I saw the 4x4 come speeding up the road. It was flying. Then it met a bus and had to swerve drastically to avoid it. The car hit the first girl as she was stepping off the pavement.

'She was thrown clear over the top of it, then the car swerved and hit the other girl. She was thrown 5ft into the air and landed on the road. It all happened in seconds.'

Both women, who were students at the Glasgow College of Commerce, were left lying in the road covered in blood. Their belongings and clothes, including a handbag, pink gloves and boots, were left strewn everywhere.

The incident happened in the main shopping area of Glasgow, at the corner of department store John Lewis and Buchanan bus station.

Whatever the cause of this fatal collision may turn out to be, you can be quite certain that no one will be placing it in the wider context of the massive expansion in 4X4 ownership in Britain – one of the most ludicrous and gas guzzling modes of transport in dense urban communities you can imagine – or the policies of Glasgow council, in a city where Fewer than 1% of journeys are made by bike

Glasgow council did a survey of barriers to modal shift among local residents. It discovered that the availability of city centre car parking, which at workplaces was usually free, was a major factor in influencing choice of transport mode. It also found that when drivers considered switching from the car to another mode, that other mode was public transport, not walking or cycling.

People appreciated that cars were inefficient if used by a single person and that by driving they were having adverse effects on others through increased congestion, pollution, and safety problems. However there was a unanimous view that despite these problems, the advantages of car travel exceeded the disadvantages for most trips.

For cycling there was strong opposition to on-road cycle lanes which were perceived as unsafe.

That's a surprise innit.
Posted by freewheeler at 19:57