‘for some unknown reason the driver could not see the cyclist’ 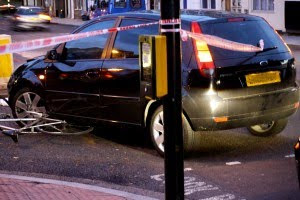 The young car driver entered the cycle safe zone at the end of the bus lane in Rectory Road, Hackney, to turn left and for some unknown reason could not see the cyclist.

I expect the cyclist was wearing dark clothing. Let’s face it, cyclists are very difficult to see at the best of times. They just 'come out of nowhere'.

According to London Cycling Campaign (LCC represents cyclists in London), not only does Hackney have the highest percentage of people cycling to work in London out of any London borough, but also an ever increasing amount of people taking to the pedal regularly.

Funny, that. According to Transport for London

Hackney.
Cycling.
3 per cent.
Posted by freewheeler at 11:38